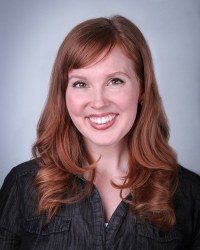 Allison Niebauer is one of two dissertation fellows in the Center for Democratic Deliberation this year. In this post, she shares more about her research on Catholic group identity in central Pennsylvania.

What is your driving research question?

How have revelations of large-scale clergy sexual abuse affected the communal identity of Catholics in the Altoona-Johnstown Diocese, and how have stakeholders within the community utilized shared discursive resources in order to seek repair, redress, and reform?

How did you first get interested in your research project?

This research project started with a poignant overlap of theoretical and personal investment. I have had a long-standing investment in better understanding communal harm and repair. Prior military and refugee resettlement experience have given me an intimate look at the multifaceted effects of large-scale conflict on communities. I came to Penn State intending to research the effects of state-based conflicts on communal harm and repair at the level of the nation. But over the past six years, my interest in studying the state as a primary unit of analysis has shifted.

I moved to State College during a significant time within the history of this region. The 2016 Grand Jury investigation in the Clergy Sex Abuse in the Altoona-Johnstown Catholic Diocese was released two years after I moved. I witnessed first-hand how the revelation of widespread clergy misconduct devastated local laity. My theoretical interest developed as I noticed how the community’s response to this tragedy confirmed and challenged existing literature on communal harm and repair.

Continued revelations of clergy misconduct in the Catholic Church have revealed the global nature of the scandal with effects born by individuals and local communities. One of my goals is to strengthen the resources available to communities to help elucidate the ways in which such harms are experienced, with the hope that this will in turn provide greater opportunities for healing and repair.

Have you had to learn anything new or challenging over the course of your work?

Within this Diocese, revelations of clergy sex abuse were first made public through the civil court system. Yet the complexity of our legal system has contributed to the opacity of the problem. I have spent a significant amount of time within our county courthouses tracking down lawsuits that while in the public domain, require perseverance and knowledge of legalese to locate and read. Gaining the specialized knowledge needed for this sort of endeavor has been both rewarding and frustrating. As much as it has provided me with insight into how such a widespread problem could fly under the radar for the better half of thirty years, it is discouraging to witness the degree to which specialized knowledge acts as a barrier to transparency.

How does your work apply to issues of democratic deliberation? What problems related to the substance or quality of civic discourse do you think it could address?

The Grand Jury report revealed a large-scale culture of impunity in which Diocesan officials, local law enforcement, and local judges collaborated to hide abuse, silence victims, and protect perpetrators.  In other words, it revealed large scale institutional failure. A functioning democracy requires widespread adherence to the law, and an expectation that if the law is broken, redress will follow. The failure of institutions charged with the maintenance of moral and legal codes threatens the health of our communities and our democracy.

In interviews with laity, one of the consistent themes articulated is that people either did not have access to information about the ongoing scandal or did not feel empowered to act upon that information. Access to information and the possibility of persuasion are fundamental to democratic deliberation, and therefore to democracy. My project highlights both the conditions that enabled this failure of deliberation and voices within the community calling for reform, transparency, and accountability.

What are your post-dissertation plans? What do you hope to do next with your research?

As a follow-up to this project, I am interested in conducting a comparative study of reparative efforts taken by different Dioceses with the goal of understanding their reception amongst laity. Many of the Diocesan scandals have similar features and the theology and structure of the universal Catholic Church lends itself to monolithic interpretation. But not all Dioceses have responded to local scandals the same way and some reparative efforts have been better received than others. A comparative study could highlight these features and attempt to answer the question of why some reparative efforts are perceived as more efficacious than others.