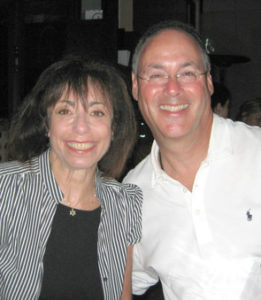 Laurence “Larry” Brown is a 1971 graduate in history at Penn State. He went on to earn a juris doctorate from Villanova University in 1975 and began his career as an assistant district attorney for the City of Philadelphia. In 1979, he was appointed chief of the office’s Economic Crimes Unit and also served as director of the National District Attorney’s Association’s Economic Crimes Project. Today, Larry practices law as a founding partner with the Philadelphia firm Brookman, Rosenberg, Brown & Sandler, concentrating on cases associated with asbestos exposure.

Larry is the chair of the McCourtney Institute’s Board of Visitors. He also serves on the Board of Visitors for the Richards Civil War Era Center and the Development Council, the top external advisory board to the dean supporting the College’s pursuit of national leadership in the liberal arts.

Lynne is a 1972 graduate in education. After earning a master’s degree in counseling from Villanova University, she embarked on a distinguished 37-year career with the Philadelphia School District. She served as a classroom and program support teacher, counselor and instructional reform facilitator in the school district. Now retired, Lynne volunteers in the local community, especially with Dress for Success, a nonprofit organization helping women in need transition back into the workforce.

Their son, Adam, followed in their footsteps, graduating from Penn State in 2002, and like his mother, he is employed by the Philadelphia School District as a classroom teacher.