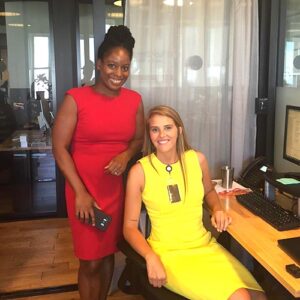 Two years ago, during the summer of 2018, I was a young 20-year-old woman who had just left her home in a small Midwest town located right on the Bible Belt to travel to what many people call the “Big Apple.” However, my journey to New York City actually started during the fall semester of my sophomore year at Penn State, through the democratic deliberation course offered by the McCourtney Institute.

I was ultimately chosen to become a Nevins Fellow, a program created and funded by David Nevins, wherein I had the opportunity to complete a fellowship with the public deliberation team at the Brooklyn based non-profit, Public Agenda.

While completing my fellowship with Public Agenda, I was not only submersed in the world of democratic deliberation, but I was also thrown directly into the midst of some of our nation’s most challenging political complexities; low government efficiency, lack of adequate public education systems, food deserts, and healthcare inequality.

All of these issues require bi-partisan advocacy and deliberation, but the challenge lies with this – how can we, as a nation, solve these seemingly unsolvable problems if we can’t even sit down at one table and have a reasonable debate? The democratic deliberation leaders that attended the annual Bridge Alliance Summit in Washington, D.C are determined to combat this barrier in political communication and efficiency.

What future do you envision for yourself in the year 2039? Is your healthcare funded by the government? Are your student loans forgiven? Will your children be able to safely sit in their homeroom classrooms without the fear of a gun looming in the back of their minds? These are not simple questions, and they certainly do not have simple answers. However, the theme of the summit encouraged attendees to imagine their hopes and dreams for our nation in the year 2039.

We were asked, “Yes, we all know how divided we are as a country, how then, can we actually make an impact?” In our society today, it is no secret that politics have become increasingly polarized. Oftentimes, both common citizens and politicians struggle to deliberate together to reach a common goal. However, the main goal of the summit was to figure out how to overcome these problems with political communication.

One of the main goals of the summit was an increase in diversity. In order to allow for better conversation, each participant was given a name tag with a random table number to ensure that conversations would include people from all walks of life and political experience.

At my table, I had the opportunity to meet with individuals from organizations such as Youthivism, Issue Voter, and America Speaks, which allowed for diverse conversations and ideas regarding the problem of political deliberation.

Although the topic of the structural inconsistencies within our political system are imperative to understand in order to make change, we at the summit decided to focus primarily on political rhetoric and communication. The main topics discussed throughout the day were:

Although all the topics discussed throughout the summit are imperative towards the reparation of our democracy, the one topic that touched me personally was the topic of ensuring descriptive representation in government.

During me fellowship at Public Agenda, I — a white woman of the wealthier side of the middle class — found that I struggled to make a meaningful connection in the communities in which I was placed.

It dawned on me then, that I would also feel such apprehension for a woman like me, had she come to the community that I lived in and struggled in my entire life – only to come in as what I like to call “the hero with no knowledge.” Descriptive representation is a vital first step in bridging the gap between citizens.

The structural and definitional problems within our democracy cannot be solved in a matter of a day. However, those at the ridge Alliance Summit have taken the vital first step: deliberating together, regardless of party lines, towards the goal of saving our democracy.