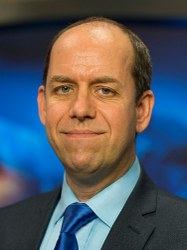 John Gastil served as the inaugural director of the McCourtney Institute from 2013-2016. He is now the Institute’s Senior Scholar. He is also Professor of Communication Arts and Sciences in the College of Liberal Arts.

John specializes in political deliberation and group decision making. John’s work on the Citizens’ Initiative Review has helped evaluate an exciting new form of public deliberation that should improve initiative elections. The Jury and Democracy Project has investigated, and hopefully helped vindicate, the jury system as a valuable civic educational institution. John has assisted with the Cultural Cognition Project in demonstrating the ways in which our deeper values bias how we learn about issues and form opinions. He has authored, co-authored, or edited eight books including Political Communication and Deliberation, The Group in Society, The Jury and Democracy, and Democracy in Motion. John holds a BA in Political Science from Swarthmore College and a Master’s and PhD in Communication Arts from the University of Wisconsin-Madison.