“Law abiding gun owners should have no reason not to test, license and register their weapons.”
– Republican from Illinois

In contrast, there is no bipartisan majority for legislation that would “Ban the sale and private ownership of semi-automatic firearms referred to as assault weapons.” This proposal is supported by 91% of Democrats, 60% of Independents, but only 37% of Republicans.

Similarly, a majority of Republicans, 57%, support a proposal to “Eliminate most current gun laws in order to protect Second Amendment rights.”  But this idea is also highly polarized, with only 40% of Independents and 16% of Democrats supporting it.

The Mood of the Nation poll, working with its partner YouGov, surveyed a nationally representative sample of 1,000 Americans from Sept. 23-26.  Respondents were also asked whether they would support a law that would “Require gun owners to take a test, get a license, and register their firearms just like they do for their automobiles.”

Overall, 56% said they would strongly support such a policy with another 20% supporting it somewhat.  This proposal is more stringent than even the strictest licensing requirements currently enacted by various states.  New York’s licensing requirements – the subject of a case the Supreme Court will consider this term – require only a check into the gun owner’s background, without the additional requirements of basic knowledge of how to safely use firearms. 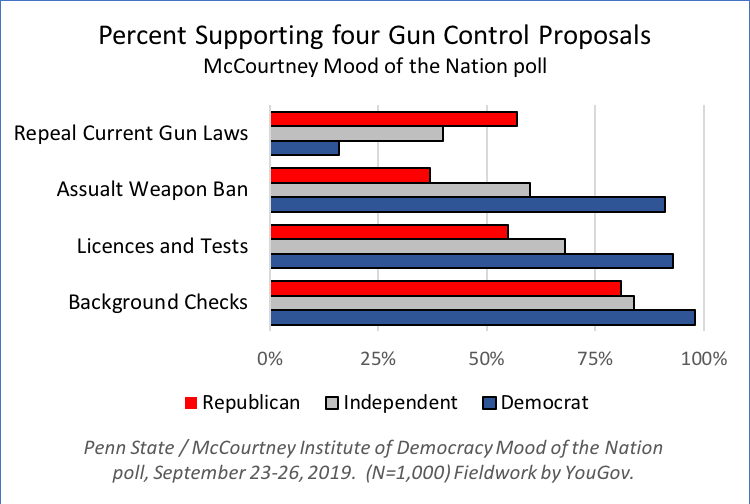 A unique feature of all MOTN polls is the extensive use of open-ended questions that allow citizens to tell us what they think and in their own words.  For the policy each person supported the most, we asked them to explain why they did so (if they supported two or more proposals equally, we randomly selected one for our follow up question).

Supporters of registering and licensing firearms as we do cars offered a variety of reasons.  For example, a 34-year-old man from Tennessee who calls himself a strong Republican told us:

Similarly, another strong Republican – as 62-year-old man from Illinois said:

“Law abiding gun owners should have no reason not to test, license, and register their weapons. I believe it would not stop mass shootings but my hope is people who should not have a weapon will not obtain one.”

Other strong Republicans echoed these sentiments, frequently noting their desire to ensure that “guns are in the hands of responsible people,” and to avoid firearms being used by “mentally ill,” and “unstable people.”  Many who also supported rolling back other restrictions on gun ownership in order to strengthen the Second Amendment nevertheless supported this idea because, they felt that “you should know how to use a gun before you can buy one” (63-year-old Republican from Pennsylvania).

Democrats and Independents support the combination of testing before licensing even more strongly but mentioned most of the same themes as Republicans.  A 43-year-old Democratic woman from Michigan explained:

“I grew up in a military family. I don’t believe military grade weapons belong in civilian hands. I believe people have the right to own guns but I believe that like a car or a dog that guns need to be licensed and registered.”

However, many seemed baffled that a reason would be even necessary.  Many told us that testing and licensing was simple common sense.  A Hispanic woman from Tennessee said that “It doesn’t make sense that you can acquire a gun that can kill multiple people easier than getting a car.”

And a 38-year-old man from Florida encapsulated many of these themes, explaining:

“A car is a machine build for transportation which has the incidental possibility of killing somebody. We treat it as such and make an effort to reduce the number of deaths by licensing people (granted we’re not THAT effective at keeping poor drivers off the road). A gun is a machine explicitly build for the purpose of killing. Why should it not be subject to the same standards?”

Interestingly, the support for a more involved system of education, testing and licensing is substantial even among Americans who oppose other kinds of gun control legislation.  For example, if we restrict attention to only those who supported rolling back gun control measures in order to strengthen the Second Amendment, 57% support a system of testing and licensing similar the way we treat automobiles.

An even higher number (74%) support background checks.  For example, a 39-year-old Republican woman from Nevada was emphatic in telling us:

“People should be able to access firearms with minimal intervention by the government,”

a 65-year-old Republican man from Florida wrote that it:

“IS VERY DANGERROUS take the guns from the good people,”

and a 50-year-old Republican man from Colorado explained that

“i am totally for second amendment rights.”

Yet all three supported the idea of treating guns like we treat cars, with a system of testing, licensing and registration. 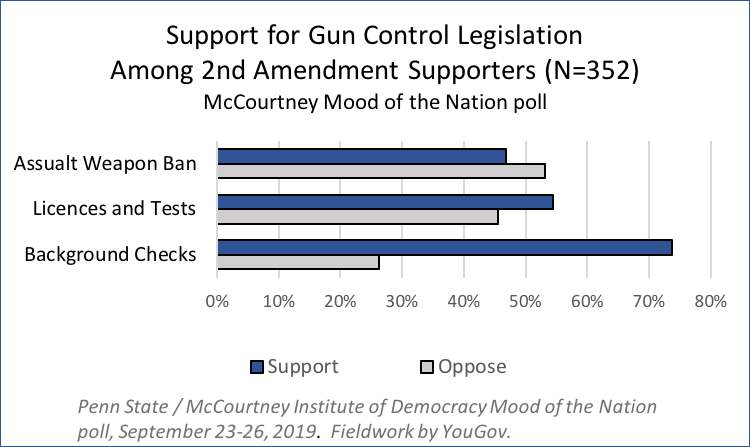 These results suggest that legislation that focuses on what some might call “responsible” gun ownership represents an unusual opportunity for strong partisans on both sides of the political divide to cooperate and work together on common goals.

The strong similarity in the words, phrases and values that Republicans and Democrats use in their open-ended answers suggest that genuine dialog and deliberation is possible within the broad controversy of gun control and gun rights in the United States.