As it became clear that Democrats would win control of the U.S. House of Representatives, pundits immediately began explaining the “Blue Wave.” Some said it was rooted in concerns that President Trump was leading the nation into dangerous territory; others pointed to alarm about health care, or compassion for citizens of color and refugees.  But Republican voters were having none of this, according to a recent Penn State Mood of the Nation Poll.

The nationally representative poll of 1,000 citizens included 307 voters who cast votes for Republican Congressional candidates in the midterm elections.  We asked them, “In your opinion, how many citizens voting for the Democrats did so because they sincerely believe that the Democratic party is best for the country?” 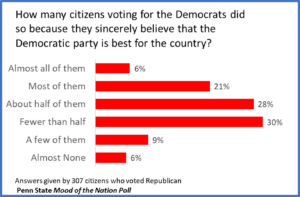 Only one in four Republican voters felt that most or almost all Democratic voters sincerely believed they were voting in the best interests of the country.  Rather, many Republicans told us that Democratic voters were “brainwashed by the propaganda of the mainstream media,” or voting solely in their self-interest to preserve undeserved welfare and food stamp benefits.

We asked every Republican in the sample to do their best to imagine that they were a Democrat and sincerely believed that the Democratic Party was best for the country.  We asked them to explain their support for the Democratic Party as an actual Democratic voter might.  For example, a 64-year-old strong Republican man from Illinois surmised that “Democrats want to help the poor, save Social Security, and tax the rich.”

But most had trouble looking at the world through Democratic eyes. Typical was a a 59-year-old Floridian who wrote “I don’t want to work and I want cradle to grave assistance. In other words, Mommy!” Indeed, roughly one in six Republican voters answered in the persona of a Democratic voter who is motivated “free college,” “free health care,” “free welfare,” and so on.  They see Democrats as voting in order to get “free stuff” “without having to work for it” was extremely common – roughly one in six Republican voters used the word “free” in the their answers, whereas no real Democratic voters in our sample answered this way.

Among the Republicans who seemed to try hardest to take the perspective of sincere and patriotic Democratic voters, the most common attributions were related to immigration – a topic made salient by President Trump in his campaign stops during the last month of the election.  As in this Republican woman from Washington who said, “Democrats welcome all people into the country whether they are here legally or not.”

The 429 Democratic voters in our sample returned the favor and raised many of the same themes. Democrats inferred that Republicans must be “VERY ill-informed,” or that “Fox news told me to vote for Republicans.”  Or that Republicans are “uneducated and misguided people guided by what the media is feeding them.”

Many also attributed votes to individual self-interest – whereas GOP voters feel Democrats want “free stuff,” many Democrats believe Republicans think that “I got mine and don’t want the libs to take it away,” or that “some day I will be rich and then I can get the benefits that rich people get now.”

Many used the question to express their anger and outrage at the other side.  Rather than really try to take the position of their opponents, they said things like, “I like a dictatorial system of Government, I’m a racist, I hate non-whites.”

Democrats think many Republicans sincere, and point to policy 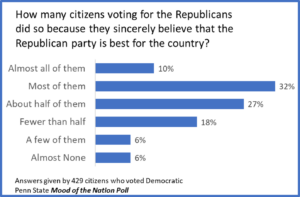 Democrats, however, were somewhat more generous in their answers.  More than four in ten Democratic voters  (42%) felt that most Republican voters had the country’s best interests at heart (combining the top two bars in the figure below).  And many tried their best to answer from the other’s perspective. A 45-year-old male voter from Ohio imagined that as a Republican, he was motivated by Republicans’ “harsh stance on immigration; standing up for the 2nd Amendment; promised tax cuts.”  A 30-year-old woman from Colorado felt that Republican votes reflected the desires to “stop abortion… stop gay marriage from ruining our country… and give us our coal jobs back.”

Other Democrats felt that their opponents were mostly motivated by the GOP’s “opposition to Obamacare,” “lower taxes” and to support a party that “reduced unemployment.”

Taking the perspective of others proved to be really hard

The divide in the United States is wide, and one indication of that is how difficult our question proved for many thoughtful citizens. A 77-year-old Republican woman from Pennsylvania was typical of the voters who struggled with this question, telling us, “This is really hard for me to even try to think like a devilcrat!, I am sorry but I in all honesty cannot answer this question. I cannot even wrap my mind around any reason they would be good for this country.”

Similarly, a 53-year-old Republican from Virginia said, “I honestly cannot even pretend to be a Democrat and try to come up with anything positive at all, but, I guess they would vote Democrat because they are illegal immigrants and they are promised many benefits to voting for that party. Also, just to follow what others are doing. And third would be just because they hate Trump so much.” The picture she paints of the typical Democratic voter being an immigrant, who goes along with their party or simply hates Trump will seem like a strange caricature to most Democratic voters. But her answer seems to lack the animus of many.

Democrats struggled just as much as Republicans. A 33-year-old woman from California told said, “i really am going to have a hard time doing this” but then offered that Republicans “are morally right as in values, … going to protect us from terrorest and immigrants, … going to create jobs.”

Voters like these – baffled but not hostile – would seem to represent an opportunity. Their answers tell us that they might actually be interested in better understanding those at the opposite end of the political spectrum and that motivation could be the first step of a long journey toward reducing incivility and polarization.  Whether such voters can long endure in today’s media and social media environment is a critical question – if they can endure and even grow, then the prospects for bipartisan cooperation in areas of shared concern will be possible.  If not, polarization will continue to rise.