US Supreme Court decisions are sometimes unpopular, but the Court enjoys legitimacy: even when the Court issues controversial decisions on issues such as campaign finance, affirmative action, voting rights, and same-sex marriage, citizens who disagree with the decision respect it and comply as a matter of civic duty.

However, President Trump has been increasingly vocal about his occasional dislike for the judicial system, even criticizing some justices by name. Most recently, Donald Trump issued a pardon for Joe Arpaio, the controversial former sheriff of Maricopa County convicted of contempt of court for violating the 5th and 14th Amendment rights of Arizona citizens and ignoring a federal judge’s orders that he stop doing so.

With this in mind, we asked a representative sample of Americans about the U.S. Supreme Court’s legitimacy in a recent Penn State McCourtney Mood of the Nation Poll. Specifically, we asked citizens about what they would want to do if the Supreme Court began making many unpopular decisions. After they gave their answers, we asked them to explain why in their own words. The answers, shown in the chart below, show that only a few Americans would want to eliminate the Court altogether, about one in five would endorse narrowing the scope of the Court, and 44% were in favor of imposing terms of service on Supreme Court justices. About one in three felt that even if the Court made unpopular decisions, we should leave it alone (the margin of error is ± 4.2%).1 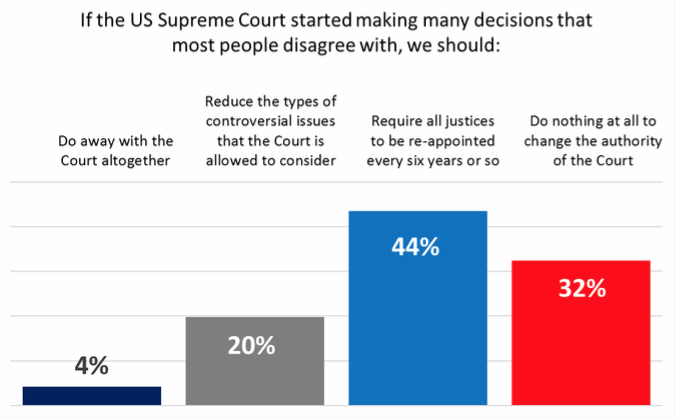 It is somewhat reassuring that only 4% endorsed eliminating the US system’s key institutional check on the power of the executive and legislative branch of the government. The handful of citizens tended to be in their 20s or 30s and mostly Democrats or Independents. When we asked them why they wanted to do away with the Court most showed disdain for the larger system of government – providing short answers like “crooks” “a worthless branch.”  Others emphasized

1Our survey asked this question in slightly different ways. Half the respondents were asked about “small business owners” and half asked about “small business owners who provide wedding-related services.” In a second randomized experiment the second choice was varied between “required to provide services to same-sex couples” and “required to provide services to same-sex couples as they would for all other customers.” Neither wording change had a significant impact on the results and we combine all question wordings to compute statistics for this report.

their desire for the judiciary to be less independent and more closely reflect the will of the people. Typical was a 19 year old Democrat from Iowa who told us:

At the other end of the spectrum were citizens who felt that we should not tinker with the system. This group is diverse in terms of age, education, and partisanship. This group gave the longest and most articulate explanations (the explanations provided by this group averaged about 90 characters, more than double the 40 character average response of those who would do away with the Court entirely.

This group provided a wide range of reasons, but most emphasized the idea that the Court’s independence is more important than whether its decisions reflect majority opinion. For instance, a 41 year old Republican from California argued:

The theme of independence often was counterposed to the dangers of short terms of service. A 36 year old Independent from Oregon told us

and a Republican woman explained that

However, the largest group of respondents differed and endorsed the idea that justices should be re-appointed periodically. Reappointment procedures such as these are used for many state supreme courts, including those in New Jersey, South Carolina, and Virginia. Women, African Americans and Americans over 65 were especially likely to endorse periodic reappointment, though they tended to give very similar answers.

Many supporting this idea focused on the inflexibility of current justices. Many characterized sitting justices as “stale,” “old fashioned,” “out of touch,” and “unable to keep up with the times.” Many mentioned the need for “fresh opinions and mindsets,” “new ideas” and more “open-minded justices.”

Others seem to focus on the idea that lifetime appointments were intrinsically wrong. A 52 year old Independent from Missouri summed it up by saying that:

And many Americans felt that lifetime appointments lead to becoming “too comfortable and powerful.” Typical was an Independent from West Virginia who said that

When it comes to the courts, party is not everything

The results from this McCourtney Mood of the Nation Poll show an America that is divided about the best future for the US Supreme Court. While a third want to leave the Court alone, two thirds think that some reforms would be beneficial that a majority of this group preferring reappointment.

By asking citizens to explain their answers – using their own words and not categories designed by us – we found a very large number of thoughtful answers. Citizens considered the implications of their choices, were concerned about the accumulation of power, and mindful of the Court’s role in the system of checks and balances.

A sizable number felt that the Court should be more aligned with public opinion, illustrating a long-standing debate in the US about the ideal level of political independence for the judicial branch.

Perhaps the most striking pattern in the answers we received is the lack of polarization. While there was some modest difference (e.g., Democrats a little more likely to favor reforms of all kinds) supporters of reappointment and supporters of that status quo included large numbers of Republicans, Democrats and Independents. We see no evidence that Donald Trump’s rhetoric has (as of today) created two hostile camps with widely differing views on the future of the Court. That provides the possibility that any future debates about judicial reforms can be multipartisan, reasoned, and thoughtful.

How the Poll was Conducted

This poll was conducted between August 21st and August 25th, 2017 by YouGov in partnership with the Penn State McCourtney Institute of Democracy.

All Mood of the Nation questionnaires are designed by the McCourtney Institute polling team, with the fieldwork conducted by YouGov, an online polling organization. The YouGov panel includes over 1.8 million individuals who agree to complete occasional surveys. The 1,000 individuals who completed the McCourtney Mood of the Nation Poll were matched to the joint distribution from the Census’s American Community Survey in terms of age, sex, race/ethnicity, and years of education. The frame was augmented by matching to the November 2010 Current Population Survey and the Pew Religious Life Survey in order to include voter registration, political interest and party identification in the selection model. The unweighted data are broadly representative of the US population in terms of age, education, and region.

The data have been weighted to adjust for variation in the sample from the adult United States population with respect to demographic variables such as geographic region, gender, race/ethnicity, age, and education, and political variables such as voter registration status and political interest. Weighting details are described in a paper by Ansolabehere and Rivers.2

Core questions asked in every Mood of the Nation Poll can be viewed here.

Supplemental questions reported in this report are as follows: