As the United States approaches its Independence Day, Americans are experiencing one of the most politically divisive periods in decades.  The 4thof July is typically a time to focus on shared symbols and traditions, but with Americans more divided than ever, it is fair to wonder whether Independence Day still has the power to unify – even temporarily all Americans, regardless of political views.

In that light, Penn State’s Mood of the Nation Poll took a unique measure of Americans patriotism.  Rather than assume a certain definition of patriotism, we let each citizen to tell us what patriotism means to them.

The results of the poll show that many of our traditional symbols and ideals of patriotism are embraced enthusiastically by liberals and conservatives, Democrats, Republicans and Independents, people of all colors, young and old alike.  However, it also showed that Americans, also have different views on what it means to be patriotic. 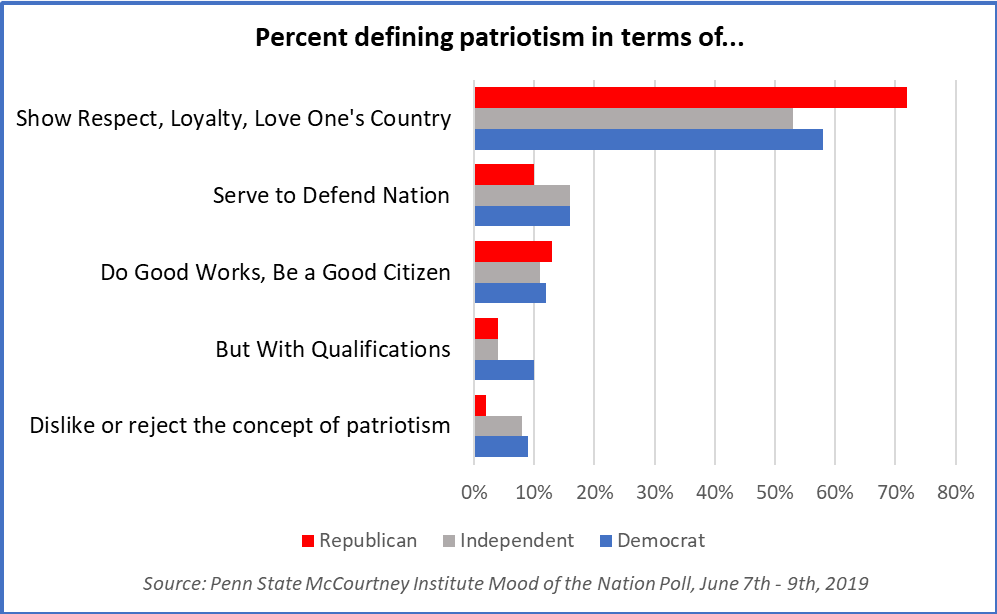 Love of country, loyalty and respect

The Mood of the Nation Poll is the only nationally representative poll that relies primarily on open-ended questions – allowing Americans to tell us, in their own words, about the issues of the day.  Our summer 2019 poll added a special section on patriotism where we asked 1,000 online respondents,

Patriotism means many things to many people.  How about you?  Can you tell us in your own words what being patriotic means to you?

The answers were wide ranging and touched on many topics.  The most common themes concerned love of country and demonstrating respect for its symbols, the Constitution, and the men and women who have served our country in uniform.  For example, a 40 year-old woman from Maryland told us that patriotism means

“Being proud of the country we are from and thank for the freedoms and the rights that our troops fight for us.”

And a 72-year-old woman from California said

“I love and respect the values that this country was built on.”

Many citizens went beyond personal feelings of pride and love, but also told us that patriotism also means the public display of loyalty. Patriotism means “It means standing when the National Anthem plays,” according to a 20 year old Independent from Pennsylvania, and. “saluting the American flag, and celebrating the 4th of July,” (41 year old Texas Democrat).

Overall, about six in ten Americans described their view of patriotism in these ways and this view represented the majority view regardless of party, but Republicans endorsed traditional measures of patriotism to much greater extent (72%) than Democrats (58%) and Independents (53%).

While most Americans imagine patriotism in terms of both feelings – such as loyalty, love and respect – and the public display of those feelings at commemorative events, about one in four felt that patriotism required more than that.

A 29 year-old Republican from Pennsylvania told us “I served in the infantry, to me, that’s patriotic. It’s patriotic to fight for what you believe in,” while a 53 year-old Independent from Connecticut believes patriotism is “A willingness to sacrifice for the good of your country, and to oppose those who would threaten it, either foreign or domestic.”

Our poll shows that 16% of Democrats and Independents, and 10% of Republicans associated patriotism not only with honoring us troops, but actually serving in uniform to defend the nation.

An additional 13% told us that patriotism for them entails active engagement in the community and nation by being a good citizen and doing good works. An Arizona Democrat (a 35 year old man) told us,

“Being patriotic means being proud of who you are as an American. It means treating all Americans as equals. It means welcoming others who want to move to America with open arms. It means supporting our troops and veterans in more ways than just a post on social media.”

And a 37 year-old woman from Missouri who identifies as Asian and a Democrat said that patriotism means,

“Treating others as you wish to be treated .. .total equality. Contributing positively to the community/nation in any way to which is possible to you no matter how big or how small that will become part of the collective benefits to all.”

Many simply said that patriotism entails “being a good citizen,” “public service,” “volunteering,” or “caring for our veterans.”

Still others felt that patriotism involved concrete actions that “put America first” such as buying products made in the United States.

In describing how patriotism entails doing more than symbolic displays or respect and loyalty, these citizens reveal important differences across the political spectrum.  While the idea of being willing to risk one’s life for the nation is bipartisan, Democrats and Republicans showed divisions on the other kinds of actions entailed by patriotism, with Democrats more likely to discuss caring across the community and even internationally, with Republicans more likely to take an America first position.

Patriotism, but only to a point …

Perhaps the most interesting differences we found, was in qualifying the limits of love for county and loyalty. These answers displayed a more critical perspective of citizenship and duty. The greatest differences in this category were political, where Democrats were more than twice as likely to reject blind forms of patriotism.

A 54 year Democrat from Maryland believed in “Always supporting and defending your country, but not blindly supporting your Government when it is doing bad things.”

While another 41 year-old Democrat from New York was more adamant – “LOVE OF COUNTRY. NOT BLIND LOVE BUT LOVE.”

Partisan differences also become evident in some of the ways that respondents qualified their answers in ways that challenged traditional notions of patriotism.

A 70 year-old, retired Hispanic woman from Texas, who registers Independent, thought patriotism was “Loving your country, more than your ideology”

Another Independent, a  44 year-old woman from Florida said, “I love America, but the word ‘Patriotism’ suggests extreme conservatism to me. It suggests… values that are outdated. We may need to find another word to suggest a love of our country.” 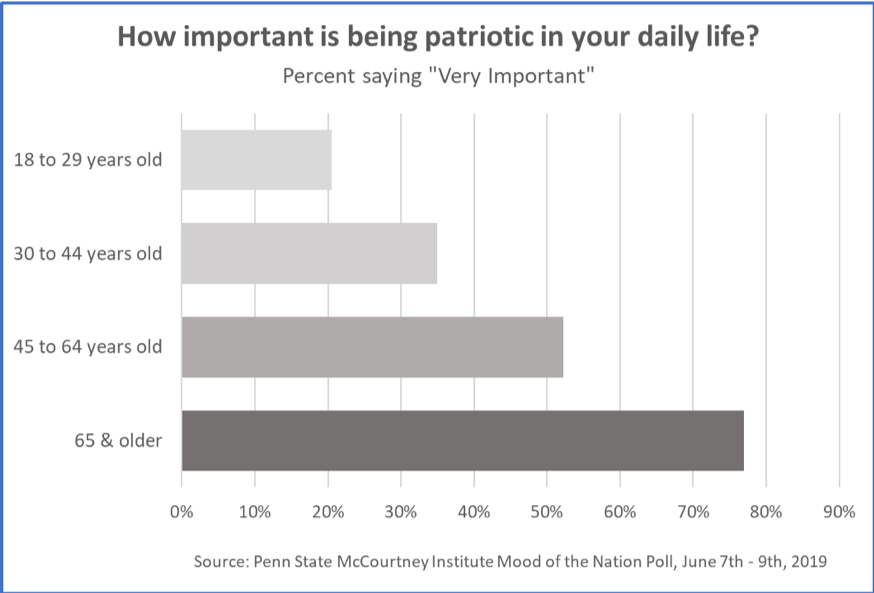 Although large majorities of Americans have broadly shared views of patriotism, we found others who did not.  Around six percent of Americans, most being younger adults, almost being Independents or Democrats, but roughly equal percentages of Whites, African Americans and Hispanics, expressed rejection of shared traditional patriotic values and love of country.

A 26 year old man from California, who registered independent says, “To me, it is government propaganda manifested as a faux sense of pride in something intangible”

Another, 27 year-old independent from Florida find Patriotism means “Nothing. It’s an antiquated word. We’re a global species now and people should embrace that.”

While a 25 year-old woman from Pennsylvania, also an Independent shared, “I don’t really buy into the concept of patriotism. I think it is often just thinly veiled racism and over-zealous nationalism, which I view as damaging.”

This alienation is also reflected in the number of citizens who had trouble answering the question at all and in a follow-up question that asked, How important would you say being patriotic is in your daily life?

More than three in four respondents 65 and older said that patriotism as “every important” in their daily lives, but that number dropped to only 21% for those under thirty. Four in ten of these younger Americans felt that patiriotism was unimportant in their daily lives.

While the starkest lines of division surrounded age, we also found that Whites and Republicans felt patriotisms was very important, while Blacks, Hispanics, Independents and Democrats felt it was less important.  Members of these groups seem to place first priority on helping people as individuals, with loyalty, pride and love of country coming second.