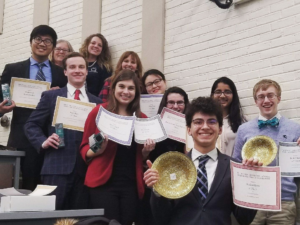 In this week’s interview, we had the pleasure of sitting down with Elisa Vogel and Seckin Kara, members of the Penn State Speech & Debate Society.

Elisa Vogel is pursuing majors in Communication Arts & Sciences and Economics, and is the current President and former Treasurer of the Speech & Debate Society. Seckin Kara is pursuing majors in Mathematics and Spanish, with a minor in Linguistics, is the former Vice President and President of Speech & Debate Society, is a former Student Voices intern at the LGBTQ Student Resource Center, and now performs with Writers Organized to Represent Diverse Stories (WORDS). The following is an abbreviated transcript of our 30-minute interview.

Seckin: I think deliberation is a neutral to positive word, meaning it doesn’t have any connotation of fighting. It has this idea of disagreement, but it always has this in-built sense of everyone in the conversation trying to reach the same goal or similar goals, and trying to figure out the process or an exact implication. Whereas debates tend to float more philosophically rather than be grounded in that process.

Elisa: I would agree. In debates, you tend to talk past each other about the points you want to make rather than actually listening and responding as you do in deliberations.

Seckin: I don’t think deliberation has the same kind of antagonism that debate has a lot of times. Because with debate, it’s a lot more of a binary concept where one person wins.

Elisa: Right, debate implies a winner and a loser. And deliberation is more of a group focus.

Seckin: The democratic side to this focuses it on what you are specifically deliberating. Deliberation in general could be about anything. But democratic deliberation is collaborating with different groups of people in order to establish a society. That is what I think the “democratic” part means. Everyone in the society is collaboratively building how they want the world to look.

How would you describe the relationship between democratic deliberation and the Speech & Debate Society?

Seckin: I think what we focus on really heavily is the ability to crowd manage the deliberation, because I think one of the biggest thing that lacks, as we’ve seen, is that a lot of people without formal debate experience don’t understand how to keep a debate or deliberation moving in a productive direction. And I think the biggest thing that we teach and work on and compete on and encourage is really finding the key clash in the argument, distilling it, and then being able to effectively mold that clash in such a direction that you can keep things moving and not circle around the same issue over and over again.

Elisa: Like being able to interact with points rather than just letting them stand.

In what ways can we work to foster better conversations?

Elisa: I feel like being open, fostering an openness to new experience or an openness to new ideas, so you can be exposed to the idea that everything isn’t just the wayyousee it, and learning to accept those different kinds of perspectives, even if you don’t agree with them. Just knowing they exist, and just because someone’s opinion is a little bit different than yours doesn’t make them a monster. I think we need to start working on being able to cultivate a willingness to be open about our opinions and to think critically about how we reach our own opinions.

What other fallacies or pitfalls have you noticed in deliberations? What kind of toxic mistakes do people tend to make in doing this work?

Elisa: People today engage in selective exposure. They will not expose themselves to things that clash with what they believe in. Which definitely skews the conversation because if you’re trying to talk to someone with a different opinion, you are literally saying different things, and there is no interaction because neither of you have sought out anything that doesn’t confirm what you already believe. So it breaks the discussion down into either talking past one another or shutting down because you don’t want to willingly expose yourself to something that you don’t agree with. It’s kind of economic, when you think of it like that, people aren’t going to choose things that they don’t think they will get utility out of. I think that’s one obstacle.

Seckin: I think it really has to do with people either getting lost in semantics, or lost in side-debates or side-issues. I think what will happen is that two people will agree on something, but they word it slightly differently, so each thinks the other is thinking of something else, so each will be vigorously arguing their point in a different direction. And they both think they’re arguing different things but they’re both arguing the same point. It’s like two people running next to each other with blinders on. So I think that happens a lot. Where they’re very closely agreed, but they think the tiny difference between them makes it a completely different opinion.

Or I think what will happen is, people will make something too personal, or they make something too impersonal. So they’ll either make a discussion so personal that you cannot interact with it, like you can’t disclaim a personal experience as much as you can concepts. Or you try to make it so impersonal that no one can properly link into it and engage with it, so it becomes this floating conversation of arbitrariness. You’re discussing such uselessly high up concepts that nothing gets done.

Are there any final thoughts you’d like to offer regarding the crossroads of deliberation and democracy?

Seckin: I want to return to the idea of safety and public discourse. Because I think that is the thing everyone is bothered over, safe spaces and ensuring people have the ability to have their voice heard. I think we’re having a big shift in how the public views conversation. There was always this idea of feeling safe during a discussion, but I think what used to happen is that the people who didn’t feel safe just never participated in conversation. And so if there was a group that was a pariah or the general discourse disfavored, they would not participate in conversation. And I think the shift that we’ve seen is that these groups have the ability to assert themselves and say, “No, I have a right to be heard in this conversation. And therefore, this conversation has to be able to accommodate my body and my personage.” And so I think this kind of shift, that we’re now opening conversations and discourse to all people, I think their assertion of their own bodily safety is really the point of contention that I think people are having issues with. And so, I think that’s why in debate it’s really important — and you’ll get called out for this or dropped on a ballot for this in a debate round in most collegiate debate circuits — if you make your opponent or the judge feel physically or personally unsafe in your round, you’ve lost the discussion. Because if you’re unable to have a discussion to, or go into a discussion attempting to, make your opponent, collaborator, or audience members feel unsafe, then there’s no room for you at the discussion table. Everyone is accommodated. And I think everyone has the ability, maybe with a tiny bit of practice, to engage in any discussion without making everyone else feel unsafe. And though I think people weren’t really used to that, now that that’s attempting to become the norm, there’s a lot of push back. And I think it’s really important, and we do encourage this, that you aren’t disqualifying anyone from your discussion by making them feel too unsafe to participate in the discussion.

The Penn State Speech & Debate Society holds meetings on Tuesday and Thursday nights from 6-8 p.m. in rooms 1 and 2 Sparks. You may also follow them on their Facebook and Instagram pages.