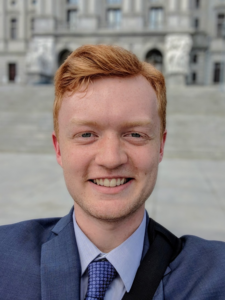 For this week’s interview, we had the pleasure of sitting down with Zak Kalp, the President of Better Politics PSU, a non-partisan political group on campus. Zak is a senior who is double-majoring in Political Science and History. In addition to being the President of Better Politics PSU, Zak is also a member of the Penn State College Democrats. The following is an amended version of our 25-minute interview.

Our club, Better Politics, is nonpartisan. Which means that we focus on issues about democracy, participation, transparency, and even more. We don’t really discuss or tackle the traditional issues in politics like abortion, gun rights, etc. We care more about issues that would improve a democracy or make it healthier. For example: having a higher voter turnout, having more political participation, making sure more groups get involved with the political process, transparency in government, Super PACs and even money in politics. There was a big push last year from our organization to figure out how to redraw the districts in Pennsylvania. We worked very closely with Fair Districts PA, and there wasn’t too much disagreement in our group about gerrymandering.

My sense of it right now is that it’s pretty poor. I think most people think that deliberation in the U.S. right now is pretty poor. I’m not exactly sure why, however, I do have some ideas. I think the way a national conversation happens through the media now happens in a way that is meant to outrage people. A CNN headline is supposed to take you aback and click on their article, while Facebook is designed to only give you information you’d like to see. With elected officials, however, I have seen democratic deliberation play out pretty well. Many elected officials I have seen appear at town halls and do a pretty good job, however, this does not happen often.

Politicians that are terrified of their base supporters bothers me. If politicians support a measure privately that would benefit the general public, yet upset their baseline of support, then they will almost always speak out against that measure, even if it is advantageous to their base. Many politicians are too afraid of being skewered by their supporters instead of working on bills that would help a lot of different people. At that point, many politicians aren’t doing much for their constituents.

I think we have more national unity than we realize. Regardless of where we stand politically, pretty much everyone can agree that the Founding Fathers had some pretty great ideas. People can get behind Benjamin Franklin and Thomas Jefferson with at least a couple of their values or beliefs. We’re still definitely attached to the history of our nation and how it started.

I worry about the things that threaten the structure of government. When people lie to Congress on behalf of the Executive branch, that definitely worries me. Additionally, the polarization in the United States does worry me a lot. A lot of what we have been talking about is definitely influenced by the national media, what with sensationalism and all.

Talking to people face-to-face gives me hope. It makes you realize that there is a lot more respect and agreement there than originally thought. I went canvassing not too long ago, and there were many times I spoke to people that I disagreed with. You’d be surprised how often people ended up agreeing with some of the stuff I was saying and also how often people understood my ideas, even if they disagreed with me. I don’t see that in the national conversation that much, but once you speak face-to-face with someone, you realize you’re not too different from them.