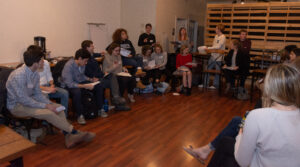 Every spring semester, honors freshmen students enrolled in the Rhetoric & Civic Life courses form groups and collaborate to host a series of events called Deliberation Nation. Deliberation Nation takes the form of dozens of student-run deliberations held across the State College area, which are promoted and sponsored by the Center for Democratic Deliberation.

These deliberations, open to the public, address a wide-range of pressing social, scientific, and political dilemmas, from racial disparities in prison, social media moderation, social security, and mental health in high school and college. The individual student groups divide themselves into sub-groups, each of which is tasked with:

Ultimately, the hope from these presenters is to create a more well-informed public based on the deliberation, and that the quality of the national conversation will become better based on these deliberations.

We wanted to participate in these discussions and see how the freshman class at Penn State handled these deliberations. This week, we had the pleasure of attending two of these Deliberation nation events, and interviewed some of the students involved with these deliberations.

“Who Owns Your Voice? How and to what extent should social media be moderated?”

So, what did students think about social media being moderated? We spoke with presenter Thomas Torquato following the deliberation about his sense of deliberation in America.

“A deliberation is a lot more peaceful than a debate, and I think this method could be very useful for a lot of people. Today, it’s just one side against the other and nothing is getting accomplished because of it. However, if we are able to talk civically about it, like we did today, then we could actually move forward.”

“Deliberation is based around a very controversial topic, where a lot of people have different opinions on that topic because of their background or the way they were brought up. Deliberation is a breakdown of those beliefs and understanding where those beliefs come from.”

“You Have the Right to Remain Racist: Racial Disparities in Prison.”

Later in the week, we traveled again to the Fraser Street Commons to participate in “You Have the Right to Remain Racist: Racial Disparities in Prison”. This presentation focused on the racial disparities in prison and the solutions to the institutional racism that have led to the racial disparity in prison. This deliberation was also split up into three sections.

The first group focused on the community aspect of the criminal justice system. This group noted the importance of mentorship programs and teachers within inner-city schools. The second group focused on changes to the justice system itself, addressing the root causes of discrimination and avoiding pretrial detainment. The third group focused on the idea of rehabilitation as opposed to re-incarceration, making sure that released prisoners are provided with more resources and that they are offered more educational and vocational programs in prisons.

“I think in general, people’s goals are more to persuade than to understand. That was said today at the beginning of this deliberation and I think it’s very true. Some people are just so set in their values that they do not want to hear what other people have to say, and instead would just rather prove them wrong. That’s why I think deliberation is a great tool.”

“[Deliberation] is a discussion more based on the solution as opposed to the fight.”

Given that these freshmen are clearly politically engaged and actively try to find solutions to some of our most delicate problems, we found it fitting to ask them a couple of questions about politics itself. Kelly continued:

“What worries me is the discrimination in America, mainly in the criminal justice system.”

“What makes me proud is that there is more and more representation in politics than ever before. That includes more people of color, more people from the LGBTQ community, and more women, and that gives me a lot of hope.”

With well-informed, passionate students like these, it’s safe to say we can expect a brighter future and better deliberations in the future.