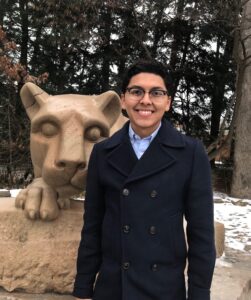 David Carcamo is a Senior at Penn State studying International Relations with a specification in National Security and a minor in Global Security in the College of the Liberal Arts. He currently serves as the Director of University Relations for the Latino Caucus and is pursuing a law degree this upcoming fall with the intent to practice immigration law. The following is an abbreviated version of our 30-minute interview.

I actually took the democratic deliberation course here, and what I got from it was that it’s how citizens can come together and speak about issues in a way that is productive. That doesn’t necessarily mean that people have to come to an agreement, or that they have to disagree, but it’s that they talk, that the knowledge bases that they are working from are accurate, that both sides have access to the same information, that either side is willing to cede to the other when a good point is made. So it’s about an attitude, but I don’t want to understate that is should at some point be productive. Speaking for the sake of speaking is good for a while, but I do think that you can reach conclusions through deliberations. And that has a lot to do with the attitude that you take going into it.

And in relation to democracy, it seems that if there ever was a time when deliberation worked, it has eroded. I don’t think we deliberate effectively. It’s not about two people discussing anymore. It’s about who is going to get the cheers and the boos. That harms it. And in general we see social media doing this to people. People want to protect their reputations and have clean records. And so I think overtime that accumulates and contaminates our democracy.

What are your thoughts on the state of deliberation on the national scale?

I think one of the elements degrading deliberation nationally is the fear held by pundits, or anybody who makes themselves a public figure in politics, that if they’re wrong about one thing, they will be excluded from the conversation altogether. Some people just don’t enter the conversation period, while others will double-down and push through their opinion even if they’re wrong. That’s not the way deliberation should work. After a news segment, the ideal thing for both sides to do would be for both sides to think critically about what they said and what was said to them, and think, “How can I adapt my views now that I know this piece of information,” or “I used this piece of information and it didn’t work.”

That’s not what really happens. Both sides leave, learn their new talking points, then come back. I don’t know whether they’re mirroring us or we’re mirroring them, but that’s the trend. It’s the fear of being wrong. And I think that’s a threat to democracy because we’re splintering in this country, and we’ll never really know until it’s too late, until we become two different Americas who are speaking different languages, where we can’t agree on the terms we’re using anymore.

Is there an instance where you were in a deliberative space and saw something that either worked well or didn’t work well?

Through Penn State Hillel, I was able to go to Israel. And we toured with the chief architect of the wall that’s built along the West Bank, which separates Palestinians from Israelis. Shortly thereafter, he was telling us how the wall was impenetrable, how it did what it’s supposed to do, that it was for safety reasons. Then he traded us off with a Palestinian tour guide who was going to take us beyond the wall into the territories. I saw a brief exchange between them. Neither side wanted to cede ground. They couldn’t come to an agreement, and they both knew so much. They both have a really broad knowledge base, and I don’t think either was wrong. But it’s about their unwillingness to share it with each other, and think, “Oh okay, this guy knows something that I don’t know, something he could teach me.” When the Palestinian guide took us into the territory, we saw people casually jumping over the wall. Everyone on the trip who witnessed it then took the Palestinian guide’s side, because at the very least he was right about that one thing. The Israeli guide wouldn’t cede the fact that one person could jump over. It’s that kind of pride or arrogance that ultimately works against us, when we don’t acknowledge that we could be wrong.

Is there a more personal instance where you were directly engaged in a deliberative space and heard or saw something that changed your mind?

There was a change that happened to me over about a year and a half. I was previously the Vice Chairman for Students for Trump. And I debated the NAACP. One of the segments of the debate was about black America with respect to jobs and unemployment. I made a point – that, in hindsight, was really ignorant – that they should enter the labor force according to whichever skill level they have and work their way to the top. The response that I got was really smart and poignant, but I wasn’t willing to listen to it at the time. Their point was, an historical one, that black people have been here since the beginning and they’ve been the foundation, they’ve worked hard and invested so much in this country and have received disproportionately so little of the fruits of that labor. So, the government, and we as American people, have a special obligation to them, to make-up for that, not just for slavery, but for them not getting the benefits of the GI Bill, and facing housing discrimination, and so many other things. Because I was working just with what I was thinking, and I was so focused on being right and winning the debate, it was something I didn’t think about. Until, shortly thereafter, when I took a step back and started reconsidering my own politics, and that was something that stayed with me. Just that willingness to be wrong for a second, led to me thinking, “What else was I wrong about?” That was a year and a half of deep thinking.

In deliberation, it’s not a bad idea to take a step back and do some soul-searching, and look at what you don’t know.

When someone is in a setting where they’re addressing an identity group they’re unfamiliar with, what do you think is the best way of approaching that situation?

To provide an example, I recently took a trip with students to Honduras. While there, we were walking amongst abject poverty. These people live on a hot, humid, mountainous island. It’s so steep from one town to the next, dirt, some roads Americans have come and paved, their children are naked. You’re witnessing the worst of the worst of conditions. Two or three of the people in our group I could hear them sometimes saying things like, “They need to take up for themselves” and “They need to form a stronger government and collect more taxes and really fix this.” Meanwhile, I know, as an Honduran, that the Honduran President took up an illegal third term, against the opinion of the international community. The island we were on is a tourist island. They generate so much revenue for Honduras in total, but hardly any of it comes back for their maintenance and upkeep. It goes to the mainland, to the capitol. The local governor said that because people weren’t participating in politics, because they’re poor and uneducated, he was no longer going to interact with them until they got their act together. And that’s a vicious cycle. You’re blaming them for their own problems and saying, “We’re not going to help you.” Those are three things right there the guys who were talking didn’t know about.

I think they started it wrong. They could have asked me, “Hey David, I know your parents are from Honduras, you’re Honduran, do you know anything?” And it would have been a great moment. But because it had already happened, the ball was now in my court. Now I could have gotten angry and offended and done one of three things: (1) I could have kept it to myself and have been angry, (2) Fight them on it and challenge them on it and say, “You’re ignorant Americans who don’t know anything” or (3) I could have used it as an opportunity to tell them the things I just told you. And that last option is the one I chose. In choosing that option, I think we were all better for it, because I think I brought in their worldview that Honduras is not like America where you can just run for city council or school borough. Those things don’t exist, and if they do, it’s silly to ask for them to do these things while living in the conditions that they do.

Amidst all these issues we’ve been discussing, what in this country makes you hopeful?

Honestly, my story makes me hopeful. Being in Honduras just now, there was a woman who was so emotional about the fact that someone from their country was able to come to the states and study and is now pursuing a career in immigration law to be able to help them as they seek asylum in the U.S. That for her was a trip. I had never seen it from her perspective, the way she was seeing it. It was so emotional for me, because I had never seen someone so happy for me, even though in the moment I had nothing to offer her. But it’s one of those things you think about, that only in America, only here. That makes me hopeful, that even though it’s not all good, it’s not all bad.