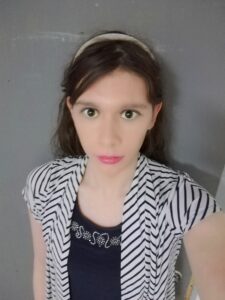 Dilvany Thomas is a junior majoring in mathematics and involved in Secular Student Alliance and Turning Point USA. Inspired by the political philosophy of Friedrich von Hayek, she campaigned for Gary Johnson in 2016 and became involved in libertarian activism. During this time, she had a personal gender awakening which saw her start to gender transition Since then, she has been a personal advocate for trans people. She engages in traditionally trans-negative groups on their own terms and attempts to speak to their experience. She has also served as a formal and informal mentor to many young trans girls. The following is an abbreviated and edited transcript of our 30-minute interview.

I think I have a rather controversial take on this issue. In recent time, I haven’t been the strongest fan of the democratic process. When democratic deliberation is brought up, it usually means people coming together to discuss a topic and allow ideas to convince other people. But I think people adopt ideas which ultimately feel good for themselves. And I think democracy incentivizes these psychological and social benefits over the material effects. In the democratic process, you may have all of these convincing arguments, but at the end of the day, your action in the deliberation, in the group, – or when you want to vote, when you hold a public position – what becomes most important is that you fit in with the group. That you conform. And its these kinds of social benefits that make me distrustful of democratic deliberation. It’s not important to come up with good ideas, it’s just about promoting a group think rather than being an effective force for producing something good.

Why do you believe the democratic process produces these troubling effects?

In terms of theories, I’ve been a fan of the Buchanan public choice school, a political economy group whose breakthrough studies were on dispersed costs and concentrated benefits. I think part of the problem is that there is a very small group of people who can benefit from obscure processes in our institutions. People idealize the idea of people becoming informed, but becoming informed comes at a cost, and many things just go by in our democratic process without people knowing the meaning of it. They don’t understand all the minutia. Take tariffs, for example. Tariffs could be garbage, but then you ask the public and they think tariffs are great and protect jobs. People seem to be willingly ignorant in the way they support ideas, thinking that we’ll just put in tariffs and that will save the steel jobs. But then as a result we will all be a little worse off, and we won’t even fight it because of the group belief that tariffs are good outweighs the negative effects of our behavior. But it only benefits the steel manufacturers. So the system is able to be corrupted by the nature of what it is.

How have you directly engaged in deliberative settings?

In the academic setting, there’s deliberations where we get in front of students, present something, then we go back-and-forth and students ask questions. I’ll personally deliberate with a lot of people. I’ll stop and talk with people on occasion. For example, there was a “Change my Mind” table in the HUB the other day, so I sat down. The topic was on taxes so I went back-and-forth with some people, discussing common conceptions of the good and bad of taxes and what we should do about them. Sometimes, I’ll take a very heterodox position, that’s my general ideology. Someone will say something like, “Well what about the social contract?” Then I’ll say, “Well actually you don’t understand the social contract theory.” Because some people will say the government is a social contract, but then I’ll say, “No, it’s a mutual obligation, not just the government doing something.” So I think I’m too bizarre for some people because of my heterodox mindset, because I’ll present something so far out there. Like someone will say, “Well, taxes pay for education and that’s good.” Then I’ll say, “Well, have you ever considered that education is doing massive damage to our society?” And people will look at me like, “What?” And it’s a whole process. And maybe that’s part of my resentment for democracy, the fact that I fail to live up to the ideals of democracy because my ideas are not popular.

How do you think we should ideally approach a deliberative setting?

I tend to approach it methodologically different than what I see a lot of in internet deliberations, where people are just sharing the first article they search up that supports their views and posting it. One of the barriers here is working with empirical observations. People will say that science generates this result and gives us some wisdom and guidance. I don’t tend to look at that. I tend to look at: what are the kinds of conditions this is under, what are the constraints, what happens if we choose this path, and what happens if we choose another. I don’t look at science as a sort of objective truth but rather as a path we can take. If you’re doing mathematical analysis, for example, you can work to understand the benefits different outcomes and values bring. People don’t think in this methodological way. This may be where philosophy comes into play, which people think is pretentious. But I’m a fan of functional philosophy, or how can we apply this philosophical idea to fix our lives. And when I approach things with this methodology, it’s usually different than what others are doing. There’s a diverse set of ways to look at ideas and tackle the evidence and interpret things. So I want to share the ideas that I’ve picked up, even if they aren’t conventional, and do it with a particular methodology.

As someone who is transgender, do you ever have difficulty with being true to your beliefs and defending libertarianism in deliberative settings, knowing ahead of time that many transgender participants will likely disagree with you?

I face a lot of skepticism, people questioning what my motivations are. There’s been doubt with some people. But I think I found my own bit of acceptance in quite a few number of communities. In the local LGBT community, there are people who more or less are willing to accept me for who I am. I am kind of one of a kind. There are people who just think it’s cool, and there’s a lot of people who are just apolitical. I think one issue, though, is in online spaces. When I first started transitioning, I hung around a lot of online spaces. They were a lot more comfortable. But they were all run by very radical communists. If you are young and trans, you are looking for guidance. I think there is some diversity for trans people before entering these spaces. It might overall lean left, but I know Trump supporters, people who voted for him who are trans. But they actually don’t believe in him now. I also think part of the problem is that you have these civil rights movements coming about, saying that we live in an oppressive society and need to correct for that. But in combatting these oppressive institutions, we create counter institutions. Ideally, I’d like a society where we don’t have an opinion. I mean I would consider passing a law that is actively discriminatory against trans people as violence. But I also don’t think laws should go after transphobic people either. For example, I think there should be rules against mis-gendering people in workplaces, but not in our government’s laws. No one should be arrested for that.

Do you think deliberation could help improve the social and cultural conditions transgender people face?

I think ultimately people want to do what is best. I think it’s a matter of pointing things out to people. Some people will think trans people are one way, but then they meet some trans people, and they think they are nice and decent and pleasant people. Or if your child is trans, we need to encourage people to accept that’s what it is. People need to be making a positive message. People need to say, “I am here. I am willing to engage in discussion with you. I am willing to be a representative. I am willing to communicate these ideas in the best way I can.” Go out there, be willing, be receptive. There are people in the LGBT community who don’t want to engage with these bigots. I say that sometimes people really just don’t know any better, they just didn’t hear the right thing, and you can say something to them and change their perspective. I think people undervalue that. That’s happened multiple times in my life. That’s kind of why I transitioned. I woke up one day and I had a realization, something changed, I saw new information, and it shifted my whole view around. I think people are open to that if you’re willing to put in the time and make a good case.