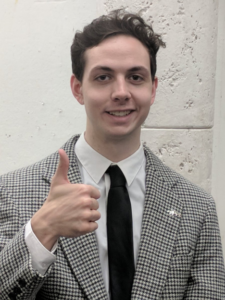 For this week’s interview, we had the pleasure of chatting with Tom Sarabok, a junior studying Finance and History. Tom was recently elected Speaker of the 14th Assembly of the Penn State University Park Undergraduate Association (UPUA). In addition, Tom is the Executive Vice President of the Penn State College Democrats and a member of Lion Caucus. We went on to discuss topics ranging from his goals as a part of UPUA to the changes he wishes to see in politics. The following is an abbreviated version of our 30-minute interview.

Something that is so important to me is the idea that every single person in the room, especially in UPUA, deserves the right to speak and has the right to have an opinion no matter who agrees with them. I think democratic deliberation is about having talking points, ideas, and discussions about policy that help with issues regarding students. I think it’s important for people to be comfortable sharing their opinions and also disagreeing and dissenting with other people’s’ opinions. I want to make sure that there is no tyranny of majority, and that people feel comfortable saying how they feel. I think that is at the root of democratic deliberation. Sometimes it’s so difficult as a new member of UPUA to have a voice in the room, and then it’s even harder to stand up and openly disagree with someone, which is something that I hope to change as Speaker of the 14th Assembly.

I think it’s a very awkward situation, and it has a lot to do with the two-party system. The two parties themselves are not apprehensive to disagreeing with each other, and there is gridlock between the two parties. However, inside the parties if you have an opinion that’s farther left, farther right, or even in the middle, there are consequences. The best example is with Donald Trump. There are so many Republican Congress members who disagree with him politically, but they know that once they speak out against him that they will face the consequences for it. I think we are falling short of democratic deliberation because we are falling short within our groups. When some people speak up in our respective groups, we can become damaged.

Something that I cannot stand is the way that the media portrays stories. My problem with the media is that I can understand the value of word-choice. Words signify meaning and using a different synonym for a certain word can change the story’s perspective. The media isn’t supposed to have an agenda, but many times these media outlets do have an agenda. Al-Jazeera is a Qatari publication, so of course they are going to write in the interest of Qatar. Fox News is conservative, and MSNBC is liberal, and no longer is the news purely information-based. In a way, it does make sense though. Let’s say someone work two jobs and has a child with their significant other, they might be so busy that they don’t have the time or energy to fully consider some of these ideas, so they want to be told what to think because it is hard to keep up with every story. But when I see what media outlets are doing by changing words, seeing what they are doing, and understanding their background, I understand that they are a biased publication that’s doing something wrong.

I think the current Democratic primary has a little bit of negativity. However, I will say that you do not have the candidates attacking each other. Right now, there are candidates from the center-left and far-left all running against each other, yet they’re willing to stand up and support each other. I think we have to look at candidates as the individual leaders of our futures, and they are doing a really good job at being respectful with one another and doing things like holding town halls. They’re willing to go out there and say their own opinions and disagree with one another

I think it has to deal with speech. I’m a big Twitter user. Oftentimes I see an overreaction on Twitter to what some people have to say, and then, in turn, there is an overreaction to that initial reaction. One example I can think of is the recent Ilhan Omar incident. She made some comments on Twitter that I personally agreed with, however you did see some people from the center-left and the right attack her for her comments. And then, people from the far-left attacked the people criticizing Ilhan Omar. So then, instead of the national conversation being about the Israel-Palestine conflict and actually getting to the bottom of policy issues, the conversation becomes an argument about whether someone is an antisemite or not.

As a canvasser and someone who works in student politics, having a really genuine conversation with someone who cares about issues but may not even agree with me is great. The first person we spoke to when we were canvassing for the midterms was an older man who basically let us practice our pitch on him. He told us his background and his story, and I love when people do that. That’s because I then told him my background and where I was coming from with a couple of different issues, and ultimately we had a great conversation and came to a compromise. I think that embodies what politics really is about. Even though we have a massive country with so many different opinions, those genuine conversations between politically-minded civilians is so heartwarming and makes me look forward to the future.

General Assembly meetings for UPUA are open to the public on Wednesdays at 8 p.m.