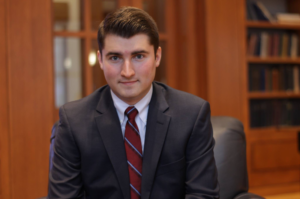 The interview for this week features Ryan Insley, the co-host of Penn State Deliberates. Ryan is a senior Schreyer Scholar and Paterno Fellow studying English, Political Science, and Philosophy. His main areas of interest include rhetoric, civil rights, and philosophy of religion. The following text is an abbreviated and edited transcript of a 30-minute interview.

How would you define democratic deliberation?

I would define democratic deliberation as an organized conversation between community members to discuss issues of shared significance. Let’s break that definition down. By “organized” I mean that there is some formal structure to it, that there is an agreed-upon way of having that conversation. Maybe there is a moderator or some thesis or topic surrounding the conversation. By “community” I mean any group of people who have an interest in, or are directly affected by, the issue being deliberated. By “significance” I mean that there is a purpose, a meaning, a concern, a desired outcome, or a sense of value associated with the conversation. A deliberation on any issue that can be resolved, or at least be discussed, should produce something helpful or help overcome something that’s damaging, in my opinion.

Do you think that deliberation is intrinsically positive?

No, it’s not intrinsically positive, there will always be failed deliberative projects. If by “positive” we’re referring to some useful outcome, or a path to a useful outcome, or some gained understanding, then that will depend on the attitudes and participants of the deliberative group. If the attitude is manipulative or hostile, it will fail. It will not be positive. If the participants are plagued by conflictual cultural or political backgrounds, it is more likely (though certainly not guaranteed) that the experience will be negative. The positivity depends on the presence or absence of these kinds of factors.

Given that you’ve interviewed numerous leaders and activists on campus, what is your sense of deliberation on Penn State’s campus?

How do you participate in deliberation on campus?

A lot of the student organizations I am a part of involve themselves with deliberation in some way. The Liberal Arts Undergraduate Council, for example, involves deliberation, naturally, based around Liberal Arts. How can we fight for the relevancy of the Liberal Arts in the job market? How does Liberal Arts help people better understand politics? There was a deliberation we held during a general meeting about branch campuses possibly allowing their students to open-carry firearms. Another time we talked on the smoking ban on campus. I’m also a part of a group called Philosophy in Conversation, where we deliberate on issues involving social justice, political ideologies, metaphysics, ethics, anything under the umbrella of philosophy. So deliberative conversations have really been a weekly practice for me as an undergraduate.

What is the state of deliberation the national scale?

It’s hard to provide a holistic understanding of deliberation because of the massive number and different kinds of deliberations that happen every day across the nation. Now, if we’re talking about just my general interpretation, it is statistically validated that we are currently at one of the most polarized points in American history. Because of this polarization, I have seen more people become frustrated with deliberation, and they have essentially given up on trying to express themselves to other people. They are more likely to silo themselves and not embrace the act of exchanging perspectives across ideological boundaries. In some ways it’s understandable. Some people have tried deliberation, yet have failed at getting their point across so many times that they lose hope. Others continually encounter people who are hostile to their identity or only seek to demean them for who they are or what they believe. It’s easy to burn yourself out if you constantly encounter unproductive or demeaning conversations. Other times, though, people might just lack the resources to have an effective deliberation, whether those are educational or organizational resources. We really need to promote deliberative excellence across the country in our classrooms and ensure everyone who wants to deliberate is able to.

What role do you think the news media plays into democratic deliberation?

There are popular portions of the news media space who intentionally inject a spin or a bias into facts. They tend to create a narrative, and I think most of the time that is because there are a group of influential or powerful people at these companies instructing them to add a story to suit their ends. Often these ends include capturing a key audience who will constitute a consistent viewership, share their content online, and help the company rack-up ad revenue. Or these ends include pushing a particular political ideology in order to secure votes or approval for particular policies or politicians. What this does is promotes a form of deliberation in which people are presenting the talking points from a biased pocket of the news industry. They are parroting pundits at each other rather than presenting their own interpretations and critically thinking through dialogue. To overcome this, I think we need to return to a form of journalism which presents straight facts (or uphold those outlets who already follow this model). Now, I am a fan of editorials, opinion pieces and the like, as long as the author is credible and they are clear in that what they are writing is an opinion piece. And I also recognize that news outlets can pick and choose which facts they prefer to present and still push an ideology; I think one way to combat that is by reading the facts presented by multiple credible news agencies and stitching the facts together for yourself. Then, you and your deliberative partners can lay out the facts each has collected through reading, and begin discussing different perspectives and responses to those facts.

What gives me hope is the recognition that we, as a nation, have the potential to make our united human experience more enriching and fulfilling, and less insufferable and cruel. There are resources, structures, and people in this country that, if directed properly, could produce a significant level of well-being and creativity on a massive scale. However, I think we suffer from serious misdirection. We often fail to target our attention and resources on the national scale to people and projects that really matter. At least we fail to do it often enough and on a level that satisfies me. We could end homelessness. We could provide every person proper healthcare. We could end hunger amongst impoverished families. It’s that potential that gives me hope. I just want to see it actualized.

There are a lot of things that bother me right now. But to put it in a word, it’s selfishness. The ease with which other people can dismiss whole groups of people even if they share the same country, culture, or human identity worries me. How easily people ignore, dismiss, or show no interest in people’s lives also worries me. People suffer from things like cyclical poverty, institutional barriers, lack of access to healthcare, and other preventable maladies. These people could be brilliant, but because they don’t have the same opportunities as others, they are completely shut off from the privileges we offer to more fortunate classes of people. Part of this is because we are siloed off from one another and we’re trained to be self-interested. The unnecessary and undue suffering that this causes is unacceptable to me. There is no rational justification to prefer your own well-being over that of your neighbor. We have to become as concerned with our neighbor’s suffering as we are with our own.