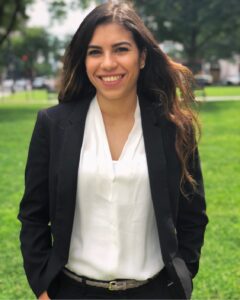 In this week’s interview, we had the pleasure of sitting down with Daniela Rojas Medina. Daniela was born in Carora, Venezuela, and is now a senior at Penn State pursuing majors in International Politics and German, along with a minor in Global Security. As a Schreyer Honors Scholar, she is completing a thesis titled “The National Socialist Underground: Right Wing Extremism and Anti-Immigration in Germany.” She is currently the President of Pi Sigma Alpha – Beta Pi Chapter of The National Political Science Honor Society, and is also working with University Libraries as a Global Partnerships Intern. In the past, she has interned for World Learning, an NGO in Washington, D.C. that promotes international development through exchange. The following is an abbreviated transcript of our 30-minute interview.

I would describe democratic deliberation as the sharing of ideas and discussion to facilitate decision making, evaluating policies or deciding who to vote for before heading to the polls. It is sharing ideas and understanding other people’s views, even those you do not necessarily agree with.

How do you see your student organization, Pi Sigma Alpha, contributing to democratic deliberation?

A big part of our club meetings is engaging in political discussion; we evaluate policies, election results, current events, pretty much anything going on in government. Sometimes we have strong personal opinions, but most of the time we express unbiased views on what is taking place in Washington. Our goal is to discuss and evaluate current political events and try to stay informed on what is going on in our government. I think it is important to stay informed in order for people to form their own opinions and have good political discussion.

Why do you believe that young people should become engaged with their democracy?

Because it is something that affects your everyday life. Maybe I see it that way because I come from a country where democracy is no longer valued and has completely lost its meaning. It has made me appreciate the democratic system so much more, and the little things we are able to do as students in the U.S. We can participate in free political discussion, criticize whatever policy or candidate we don’t agree with, organize a peaceful protest on Old Main if you want to, knowing there will be no repercussion to you doing so. I think democracy is one of those things where you don’t know how lucky you are to have it until you lose it. I think it is important for young people to take advantage of it, have political discussions and stay engaged.

What are your thoughts on and experiences with the state of democracy in Venezuela?

Venezuela is a dictatorship disguised as a democracy. We do not really have a say or vote, your vote there actually does not count. People can vote but everyone knows it will not change the outcome of the election. This is why we had such low participation in the presidential election in May. People are punished for criticizing the government and questioning the status quo. Opposition leaders are put in jail, news sources are censored, and journalists are arrested for saying anything against the government. There is no freedom of press whatsoever. We don’t have separation of power and the Supreme Court and all the other powers are completely dominated by the executive branch, so there is really no democratic way out of this dictatorship we are in.

How is information distributed in Venezuela? Is there a propaganda effort on behalf of the government?

They usually do some propaganda. A lot of the time, they’ll dominate all of the TV channels and it will be just the President talking, it’s called “cadena nacional.” Sometimes they will do this as a distraction when something important is going on. They will shut down the programming on all channels and have Maduro talking about nothing for three hours. Most people in the country rely on TV for their news and most TV channels are censored so it is difficult for people to get unbiased news and information. You have to pay to get access to channels from abroad and not everyone has the money to do that. A lot of Venezuelans also do not have access to the internet. If you are from a rural area, like my hometown, you most likely do not have WiFi in your home. My family only got WiFi a few years ago and now they are likely going to remove it because it is too expensive to pay for these services.

What happens to individuals in Venezuela who stand up to the government?

Oftentimes they are put in jail or killed, though most of the time they flee the country and live in exile before they can be put in jail. The last person who led the opposition movement and called for mass protests to take down the government was arrested in 2014 for “inciting violence” and probably tortured. His name is Leopoldo Lopez and is now under house arrest. He was really the main leader of the opposition, he was the face of the movement. There are some politicians now who are leading it but there is a power struggle and nobody has stepped up to take that leadership role. One of them is Capriles Radonski but he has been trying to be very peaceful and saying things should be done democratically and the right way, most likely because he fears the same will happen to him. But how do you do peaceful negotiation with a government that is willingly starving and killing its own people?

How do people in Venezuela feel about the state of democracy?

Our democratic system has literally become a joke. It is only now that most of the population is realizing how undemocratic our system of government is and just how bad it has gotten. People were satisfied with the system and were willing to give certain rights up because the economy was doing relatively well. The price of oil was high when Chavez was in power so people were financially stable and he often initiated social programs around election time, he built houses and gave food to the poor. But now, there is no food when you go to the supermarket, there is no medicine, the cost of healthcare is unreasonably high and everything gets more expensive each day. When the economic crisis started, Venezuelans began to experience drastic change and had to make a lot of adjustments to how they live their everyday lives. This, I think, is what has most Venezuelans angry at the system and realizing the deep rooted issues within our democracy.

Throughout all of this though, political participation was still relatively high in Venezuela. In my family not voting was not an option, everyone went to vote, even if the elections were rigged, even if it didn’t make a difference. Voting to them was a statement, it said to the government we are not giving up. Even my grandma who didn’t like to leave the house much, would get someone to take her to the polls so she could vote. This was up until the last election however. I think the Venezuelan people have given up at this point.

What in politics today makes you angry right now?

A lot of things make me angry in politics today. I do not like the rhetoric that is used by the current administration. I do not like the way some groups are classified as the other or deemed lesser, or the way the American people are being polarized in campaign propaganda and the media. This liberals vs. conservatives and us vs. them dichotomy is only furthering the divide in the U.S. and creating an environment where people feel like they cannot disclose their opinions because they fear being attacked. I do not like the way everything in politics has become so controversial to the extent that people are avoiding engaging in political discussion because it is better than getting into an argument with a friend or colleague. We should be having these conversations, sharing our beliefs and talking to people we don’t agree with while remaining respectful of their views. It is the only way we will understand each other and get anything done.

What makes you proud in politics today?

The fact that democracy in the United States is very successful and has been since it became a country. Despite all of the issues that we complain about and the things we wish were different, the U.S. is still doing better than most of the world and that is something to be proud of. Democracy works here: when you vote for your representative, you know they will do what is right by you because, at the very least because they want to get re-elected. In Venezuela, politicians do whatever they want, let their people starve, reject humanitarian assistance, and let the country dive into deeper economic crisis because there is nothing at stake so long as they remain in power.

What are you worried about in politics today?

I am frankly concerned with the conservative trend we are going towards these days and the Supreme Court now being majority conservative. I am worried about completely reversing and taking three steps back on all the progress that has been made on various social issues.

What makes you hopeful in politics today?

The fact that there are people like Sen. Kamala Harris in government fighting for what she believes is right and what the people of her state believe is right, makes me hopeful. Even though it was unlikely that Kavanaugh wouldn’t be sworn in, and unlikely that the fight she was putting up in the hearings would make a difference, she was still determined to do something about it and show her voters that she did all she could. It makes me hopeful in the government and our future leaders.