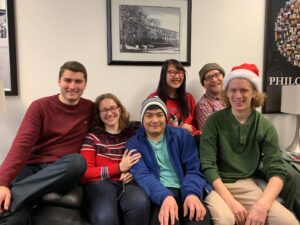 In this week’s interview, we had the pleasure of sitting down with Hope Wilson. Hope is an undergraduate student pursuing a major in Philosophy and a minor in English. She is the President of Philosophy in Conversation, a student club she created as a comfortable space to discuss philosophy in an interdisciplinary context. She is interested in making philosophical topics and conversations accessible to people of all backgrounds. The following is an abbreviated transcript of our 30-minute interview.

I think deliberation, in the true sense of the word, means a conversation with care. Where you are slowly working through an issue, there are two sides to the issue, and you are trying to come to some even ground. Whether or not that’s actually how we deliberate with each other on a day-to-day basis is another question. I think part of what true deliberation would entail is a space where we don’t really have a hierarchy, where it is not a matter of expertise, but rather meeting each other where we are, listening, finding common ground, and teaching each other. I think what actually ends up happening is we take these hierarchal stands, and that might be impossible not to do under our capitalist world. That being said, I think one of the aims of philosophy is to make yourself aware when you’re doing that, because you’re subjecting yourself and your opinions to critical examination. And as you’re doing that, there’s a lot less of a chance you will take a hierarchal stance. Because it is almost illogical to say my experience is better than your experience, or more valid. We can only have a deliberative discussion if we are subjecting ourselves to that critical examination.

How do you see the deliberative process functioning within your club, Philosophy in Conversation?

When Philosophy Club [Philosophy in Conversation’s predecessor] began, I was the only woman attending meetings. As the only woman, I often felt that my experiences and interests were not interesting enough. Most of the members were interested in the philosophy of science. What I tried to do with it is to make Philosophy in Conversation a space where no one has to feel like that again. We try to make the space so everyone can speak. Generally, I think we provide a space where you can say things that you can’t necessarily say in a philosophy class, real concerns. We try to relate philosophy to our everyday lives. It’s not just reading things from a distanced standpoint like we do in class. During club, we actually connect our experiences with them, and have more passion in our conversations. It’s definitely not without faults though, it’s still the case where it is very easy for it to get too loud and have someone’s opinion not heard. But it’s something we are slowly getting better with. And I think that’s something that’s good for democratic spaces generally, this idea that although we are all not the same, we are on an equal playing field in the amount that our voice matters. It’s definitely a teamwork kind of thing. Especially if you read a lot, you can refute different claims, and it’s easy to extract the person you’re arguing with out of it and dismiss them because what they’re saying has been disproven. We try to not do that. We try to be more relaxed and allow people to be honest. That way you learn a lot more about what people really think, and you can ask important questions that are self-critical.

What are your thoughts on democratic deliberation beyond the classroom and throughout the country?

I think it works in a hierarchal manner, where we think our opinions are more correct because of the experiences we’ve had, or because we hold certain degrees, or have held certain positions. I think it’s a personal thing. When you don’t treat people like their opinions are as important as your opinions, when you’re not being mindful about your own shortcomings, it becomes a shouting match. And it doesn’t have to be that way. We find a need to compete with each other because of our capitalist socio-economic system, where we are taught from a young age we are in competition with one another. I think that plays a large role in why we can’t listen. Usually, we don’t actually have deliberation, we have yelling and not listening. That’s not to say that someone can’t say something wrong, or harmful, or hateful, and I think you should be called out on that, but it should not come from a place of authority. It shouldn’t be “As a professor, I know this” or “As a lawyer, I know this.” It should be “As a human being, I’m not okay with you saying that about another human being.” That’s something we’ve really gotten away from with this attachment to position in life.

How could we encourage people to more effectively deliberate on philosophical ideas without these shortcomings?

You can never fully be in control of the deliberative space. I think it is a heavily personalized thing. I think each person should work to create spaces where there are no hierarchies, where people can think, and talk through ideas, and value these situations as productive. Some people are socialized to believe deliberative and philosophical spaces are weird, that it is strange to think about ourselves and not want to compete with other people. That’s part of the problem. But as more people become interested in politics and philosophy, or meet someone who is, that will become less of an issue. I think the best we can do is be an embodiment of those ideas. Democratic in being. Listening to ourselves and the needs of others, weighing them all, and behaving in a way that is beneficial to all.

What role do you see philosophy playing in the democratic deliberative space?

The history of philosophy at large is going back-and-forth on ideas, almost a dialectic on questions such as “What does it mean to be a person?” which has changed so much over time. I think that you realize every opinion you hold is dynamic is nature, that there is no way you can be sure of something one-hundred percent. That uncertainty when thinking on politics, that idea that maybe your opinions aren’t so stable, and maybe you can examine them, reflect on them, is important, because then maybe they can change. That would be the value. Philosophy continues to change overtime and that is seen as part of it. The history of philosophy is a deliberation, in a sense, a slow back-and-forth, reaching flexible conclusions. There is also no part of life that is untouched by philosophy. Philosophy is embedded in your views. What you think is right and wrong, who you think you are, what kind of person you want to be, what kind of role you want to play, it’s all there. Philosophy as a discipline articulates these things we have been feeling for thousands of years. So I think it can be helpful as a pedagogical tool to learn how to be an active and good member of society.

Are there any final thoughts on deliberation you would like to offer?

There are certainly opinions that are wrong. There are things that should not be happening. And we should work to imagine how those things could not be the case, then actively work to try and change them. I am definitely not advocating for all opinions being good. But what philosophy does is help you imagine a world where marginalization, oppression, or non-freedom are not happening. Once we start to imagine that, and we create spaces where it is safe to imagine that, I think that we can actively work to change things. I think that is a big part of deliberation. We should listen to people who imagine worlds other than our own, and take them seriously.

Philosophy in Conversation meets every Thursday at 3:00 p.m. in 240 Sparks. You may join their Facebook group here for updates.