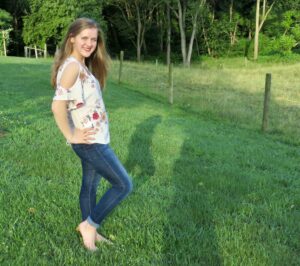 For this week’s interview, we had the pleasure of chatting with Allison Dombach, the Chief of Staff of the Penn State College Republicans. Allison is a sophomore Secondary Social Studies Education student who plays a significant role in the College Republicans, a club that applies democratic deliberation in a number of different ways, including open debates with members of the College Democrats. Additionally, Allison is a member of the Disciplemakers Christian Fellowship on campus.

The following is an abbreviated version of our 30-minute conversation.

It’s a conversation between two people, kind of like the one we’re having right now. Especially now since we are so polarized, people generally jump to thinking the other person has bad intent from either side when having a political discussion. I think it’s important to understand both sides of an argument, especially in a debate. And that is not only to “win” an argument, but rather to better understand where people come from and potentially finding a compromise.

How do the College Republicans apply democratic deliberation?

We have debates a couple time a year with members of the College Democrats. This year so far we have done judicial interpretation as one of our topics. Additionally, we often have discussion topics in our meetings with members of our club. In our club we have some members who are more Libertarian, and some members who are more mainstream Republican, and everything in between. We just try to foster conversation in a polite and civil way. Usually the discussions revolve around current events.

On a national scale we need to be better. In the past couple of months we have seen just how gross it can get between both sides. Additionally, to say that these issues are new and one-sided would be intellectually dishonest. People having bombs sent to their house, being chased down the streets, or being kicked out of restaurants is not useful or helpful. Dialing down the rhetoric on both sides and having people on both sides being able to talk and not “own” the other person is what actually is helpful.

I really try to not be angry about politics. I do not want my worldview to completely revolve around politics. I’m a Christian, in fact I’m a very religious person, and I think that anger for the sake of being angry is wrong. I think that getting worked up or angry about some political issues is not a good way to have a conversation. In the Bible it says “in your anger do not sin.” Life does not begin and end by politics to me. When you get out of the news cycle for a weekend, you realize that your life has not changed too much while you were away from that news. To me, that’s a good reason to not get so worked up over politics in your everyday life.

In politics I’ve seen the way that people on an individual level can get past their differences and get along with each other. When people can step back and say, “we’re Americans”, that is what makes me proud. Unfortunately there are few people in the House or Senate who I think do that. Nevertheless, I’m not sure anyone is setting a great example making me proud right now. Sometimes I’ll see a politician give a speech and think, “yeah, I’m proud that this is my party.” But it makes me proud that the younger generation and people our age are going to be more politically active and intelligent when they get older. Obviously Millenials and Gen Z still aren’t going to vote the same way that older people do. Voter turnout for young people is still really low. Nevertheless, it makes me proud that there are more politically aware people in our generation.

Recently, Cameron Kasky, a Parkland student, came onto Ben Shapiro’s show to talk about gun control. The fact that there was someone like him, who started out with very polarized opinions, was willing to have that discussion gave me hope. The fact that he’s very leftist and very gun control, he had to break away from March for Our Lives and have an honest conversation and realize that Republicans aren’t interested in kids dying. He understood that Republicans wanted protection, but they want it differently. They could disagree on policy, but they could agree that Republicans aren’t evil. The fact that he could be fair and have a conversation with someone that he disagreed with gave me a lot of hope.