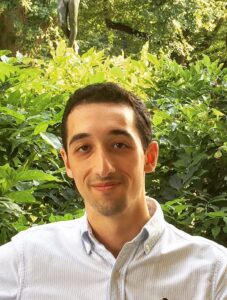 For this week’s interview, we had the pleasure of sitting down with Daniel Hizgilov. Daniel is a senior studying History and International Political Economy, with a minor in Business in the Liberal Arts. He is also the Vice President of the Liberal Arts Undergraduate Council and an undergraduate researcher on the McCourtney Institute’s Mood of the Nation Poll. Last summer, he was an intern for a government affairs firm that works in the defense and aerospace sectors. This is an abbreviated version of our 30-minute interview.

The LAUC (Liberal Arts Undergraduate Council) has existed under a couple of different forms. My friend Ryan and I have been trying to make the club more deliberative in nature by hosting discussions based around a lot of different ideas. These ideas include academia, personal development, ethics, etc. We are not trying to be deliberative in a way where we’re trying to find a consensus amongst our group, but that does seem to happen anyways, given that people usually come to our meetings with a “blank slate”, and form their opinions based on what other people in the group are deliberating about.

Popular media has gotten to the point where they’ve embraced click-baitey, ad-revenue gathering tactics. This has necessitated sensationalism, and there is really no form of mass media now that promotes deliberation. Remember those PBS shows where they would have intellectuals sit down and discuss a myriad of issues? That does not really happen anymore. Additionally, the rhetoric, even within moderate news media, has changed quite a bit. On the other hand, the Unternet has the chance to be this great, utopian deliberation platform. However, humans are so prone to fighting that it’s impossible to control the deliberative process on social media

I’m politically conservative, and I was kind of upset with the way the Brett Kavanaugh situation was handled. I thought it was handled pretty poorly. I’ve noticed an escalation of the political rhetoric on the left, and also noticed how it’s been creeping into public life. I also vividly remember the shooting of Representative Steve Scalise. That’s concerning to me because that’s a serious escalation of political violence.

Economically the country is doing better, which I think is a good thing. I think there are a lot of things going on with American workers that are trending in the right direction.

Definitely the escalation of rhetoric on both sides of the political spectrum. We are very close to having mob-like attacks happening on the regular over typically mundane political acts, like a Supreme Court nomination. You definitely see this stuff online, but it is creeping into real life.

The Liberal Arts Undergraduate Council meets on Wednesdays at 5 p.m. in 124 Sparks.