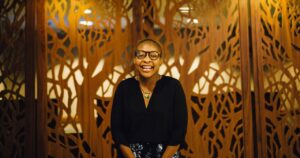 In this week’s interview, we had the pleasure of sitting down with Stephanie Keyaka. Stephanie is an integrated-undergraduate-graduate student in the School of International Affairs. She is passionate about peace, justice, and more specifically, fighting for the advancement of human rights for all people through sustainable development. This past summer, Stephanie interned as a Nevins Fellow for Councilman Zeke Cohen of Baltimore. During her time in the office, she was tasked with managing City Hall operations, while canvassing and policy-organizing around the district.

In this capacity, she utilized her passion for grassroots mobilizing and community organizing to advocate on behalf of the SDG development goal of reducing inequalities faced by the marginalized communities in the city, particularly those experiencing hunger, homelessness and poverty. She worked with a team of canvassers to collect 10,000 signatures for a fair housing ballot initiative that mandated the government to commit to allocating a minimum of a million dollars annually towards the city’s fair housing fund, which rehabs abandoned houses across the city and rents them out at affordable prices to residents.The following is an abbreviated transcript of our 30-minute interview.

Public participation, politics, and government all happen through a range of processes from the local, to the national, to even the international level. This participation includes public forums, jury deliberations, voting, and really any form of collective policy making. This governmental participation in these types of forums is what I would call democratic deliberation.

While working in Baltimore, how did you see democratic deliberation executed in the public sphere?

I have seen more democratic deliberation at the local level than I have ever seen at the state or national level. People coming out to vote, local leaders and citizens coming out to canvas (which is something I got to do a lot of this summer), canvassing for bills to be amended in their city charter, or canvassing for bills to be put on the election ballot. I had the opportunity to sit on some boards, including the zoning board of Baltimore city, and the public housing board, which featured a lot of people coming to have open forum discussions with their local leaders about what they felt the city needed. With the Department of Public Works, for example, water was a big issue, so there was a lot of people rallying around changing the way that was being done. Even things such as construction were deliberated. A side part of that is working in City Hall, where you get to talk to people a lot more than at any other level of government. You have people coming in to discuss their billing issues, or people calling in to Legislative Constituent Services, through which people can directly inform their council people what they felt Baltimore city needed to change. That I think is the biggest form of public participation that Baltimore city had.

What are some ways that people can actually deliberate with the policymakers who are designing and passing their legislation?

I think that’s where public forums are useful. I got to sit-in on local public forums, whether they were on the police force in Baltimore city, or safety in the city in southeast Baltimore. We had people come in each month from southeast Baltimore, representing different organizations, representing different businesses, and they got to speak to the chief of that district directly, and talk about the crime happening in their neighborhoods that they see as a citizen or as a resident. Talking about what they think needs to be fixed. Even if you’re the chief of a police force, you can’t see everything all the time, so this allows the people to focus you directly on what needs to get done in that city. For example, there is a huge drug epidemic happening in cities across our country, and these residents experience that firsthand, with the drug dealers on the corner, or the lootings at the gas stations. These public forums allow residents and citizens to know that they can come and voice those concerns and they have a place to do so. It also allows for an exchange of ideas. People from one neighborhood are listening to what’s happening to people from another neighborhood, and they’re talking about what has worked best, what committee worked. This is a big way to allow people to speak to their trusted, elected officials. We should utilize more of that. And many people don’t know these are happening, which means they are not as accessible as we would like them to be or they are not as broadcasted as they should be. We want the locations and the times to be more varied to help correct for this. A big part of people being able to participate in their government is having these ways of participating be accessible.

What is one example of a time you directly participated in a deliberative process?

Housing was a big focus of my internship. Specifically, the Board of Housing meets to talk about gentrification, and at this time there was one community in our district that was very against this new five-story building being built, and the developers and the local community association were going back-and-forth. This is when the local Baltimore city councilperson gets contacted. The association reached out, listed out their grievances, such as the property developers not taking into considerations the concerns of the people who already lived there, which always happens. There were also health and public safety facets of this new building that would have affected people directly. The developers were ignoring them, only talking to them through their lawyers. This is a hardline to tow: you don’t want to anger either side as a councilperson, but you are elected to represent this community of people, this association calling for your help. So I was tasked with drafting our official statement that we would read at the housing meeting about this development. I came to this meeting, and I was surprised at how many locally-ran businesses and people who were willing to sit through ten other conversations on other projects just to get a chance to talk about their building. When I got up there and made the statement, we chose to stand with the people and find a middle-ground where the developers could speak with the people before this building was being put forth. And at the end of this all, the people had their voices heard through us. I wish it wasn’t that hard, I wish it didn’t take a councilperson to voice the concerns of a hundred people before they listen. But that’s what public participation is, allowing people to sway your decisions as a politician, allowing people’s voices to be your placeholder and where you lie when it comes to policies.

What in this country makes you angry?

At the heart of it, at this current moment, there is a lot more Millennial participation, my friends are civically active, my professors are talking about it, and they are all plugged-in right now. But even with all the public demonstrations and participation that is happening around the country and the world, I still feel that voices are largely being ignored. To see women taking time out of their day to put on a Handmaid’s Tale costume, which is a very serious display of concern, whether you are standing outside a court house or Congress, begging public officials to hear them, to act in their favor, and being ignored. It’s disheartening for a person who is enthralled with politics, because I know what good it can do. I know what it is supposed to look like when done directly. And I think at this moment, politics is being done very wrongly, and that makes me angry.

What in this country makes you proud?

I wake-up every morning and see the smallest people being civically informed and engaged and participating in democracy, from the local to the national level. Working in local politics this summer was such a breath of fresh air. There is less pessimism there than at the national level. People really believe in the smallest ways that they can make a change. Whether or not it’s just a person complaining about a pothole, and the pothole being fixed. That’s a positive affirmation that your government is listening to you. Or calling your local councilperson and talking about the gas and electrical problems happening in this strip of a town, and then that person listening and fixing those concerns. At the local level, we see these immediate effects of what public participation can do when politicians actually listen to the people. That’s what makes me proud.

What in this country worries you the most?

Though some will debate it, it feels like this is the most split our country has ever been. Everything, no matter its fundamental benefit to the people, is bipartisan. Everything is a Democrat issue or a Republican issue. If you are a Democrat, you have to fall hardline on this side, if you are a Republican you have to fall hardline on the other side. Even as a person who identifies with one party over another, I think a lot more things should fall in the middle, should be seen as bipartisan, should not be filled with anger, party affiliation, and money. I am worried that the higher we go up, the more other noise and factors play into how politicians vote, rather than just what is best for people.

What in this country makes you hopeful?

The number of Democrats being elected to office right now. I think with every single one, I am excited. Knowing that with every single Democrat elected into office, there is another person who has the exact same views that I do, there is another person who advocates for the exact same things that I do, and a person who advocates largely for a larger amount of people than those on the opposing side of things. And knowing that these people are not just white men, but they are Hispanic and Latin American women, Black men, Black women, and they are taking seats that have been held by the same politicians for many years, and now there are new and innovative ways of doing things. Right now, we see that more than ever, that the country is angry, and with anger, comes push for change. And I am hopeful for that.

For more on Stephanie’s experience in Baltimore, listen to her interview on the Democracy Works podcast.