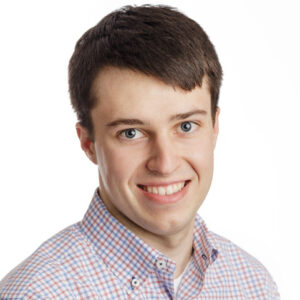 In this week’s interview, we had the pleasure of sitting down with Brendan Bernicker. Brendan will be graduating this semester with a bachelor’s degree in Philosophy and a master’s degree in Political Science. Brendan’s interdisciplinary research focuses on ways to make criminal sentencing more equitable, and he is particularly interested in procedural safeguards to ensure the just treatment of juveniles, racial/ethnic minorities, and those struggling with addiction. In his free time, Brendan sometimes volunteers with the local public defender’s office, and he previously interned with the Public Defender Service for the District of Columbia.The following is an abbreviated transcript of our 45-minute interview.

Seeing the kinds of people being elected recently, and especially hearing the kind of messaging that has been effective in winning elections, I worry about that state of our political process. We are in a position where people feel they have to pick the least bad of two candidates or two parties. To me, deliberation is a way of turning this binary choice into a continuous ideological space where you can pick and choose, not a liberal or a conservative policy, but a good policy, and can pick not liberal values or conservative values, but values that you can embrace, regardless of who’s values they are. I think deliberation is a way of breaking down false dichotomies. And the value of that in a democracy is that not only do you get a better expression of what people believe, but you also increase the range of things that people can express. It puts policies on the table that might not otherwise be there, and it lets people go beyond their own narrow perspective and put faces to different types of experiences than their own. It’s an opportunity to not just better express yourself, but to express yourself better.

When you see how our national politics works right now, it’s easy to lose faith in democracy. It’s easy to say, “Man, people have these bad views and these bad ideas, and we shouldn’t be letting these people choose our government.” To me, that’s the wrong answer. At some point, you have to do the work of convincing people to agree with you. The democratic process tells you when you haven’t done that work, and we still have a lot of work to do. This isn’t a matter of policy, this can’t be fixed through legislation, we can’t fix this through the courts. We need to go out and do the hard work of persuasion, and deliberation is the essential tool of democratic persuasion. When we are at our worst and make bad decisions, it allows us to go out and make sure that our next round of decisions is better.

How would you describe the state of democratic deliberation on the national scale?

My concern is that it’s tempting to think of deliberation as an unqualified good. That more deliberation is better, and that less deliberation is worse. But I think the case of America today shows us a more nuanced picture. There is deliberation going on, but it’s mostly between people who agree with each other, between somewhat homogenous groups. My worry is that those kinds of conversation can be radicalizing. When all you ever hear is people who agree with you, you get the sense that everyone agrees with you, or anyone who doesn’t agree with you just hasn’t had the conversations. This especially comes up when you deliberate in groups of people without diverse experiences. Without a diversity of perspectives, you run the risk of gaining a false sense of security in your values and beliefs, and you think it’s justified. All the arguments you’re hearing support your preexisting commitments, all the discussions you’re having make you feel more strongly about them. You’re in a feedback loop. But if you deliberate with people who disagree, you hear new categories of arguments, and it might make you less certain that everything you believe is good and that everyone who disagrees is ignorant or evil.

I really worry that the places where past generations went to have these conversations were not as segregated in ideology as the places that are available to us today. I’m particularly worried about social media, because it’s often designed to show you things that either make you angry or make you feel good, rather than things that make you think. But overall, people aren’t engaged in activities that cut across political ideology anymore. Even the places where we buy things, or go for entertainment, or the television shows we watch, are divided. We increasingly live in different Americas. A deliberation in liberal America or conservative America might make you a better liberal or a better conservative, but it won’t make you a better American.

How do your internship experiences tie-in with democratic deliberation?

The very first professor that I met at Penn State was Dr. John Gastil, who at the time was the director of the McCourtney Institute for Democracy. I met him at SHO TIME, Schreyer orientation, and he told me about the Nevins Fellows class he was teaching. I took the class, learned a lot about deliberative democracy, had the chance to talk to people doing deliberative work all over the country, and then was placed for an internship with a group called Everyday Democracy. That was a really important experience for me. I went to Everyday Democracy thinking that I was going to be organizing deliberative democracy events because that’s what we learned to do in the class. The work, though, was different. They have these deliberative events, but they focus mostly on getting these communities together to solve local issues. I got to support those events; but I learned early on that my role in those discussions was to enable them, not to participate. One of the big things Everyday Democracy does are these racial equity trainings. We had a very diverse team, and we talked really openly about different types of privilege, using privilege to effect positive change, and being a gatekeeper of privilege. I learned early in my internship, and practiced throughout my internship, finding ways to use my privilege and my status to bring new voices into important conversations.

So many problems that I observed while I was working at Everyday Democracy came back one way or the other to the law. So many problems that afflict communities of concentrated disadvantage, especially communities of color, come back in one way or another to the law— either in the form of the civil law, in area like debt collection or landlord/tenant disputes, or the criminal law, which has deprived generations of families of sons and fathers, taken kids out of school, and led to de facto racial and class-based restrictions on important civil and political rights. The law often serves as a way of keeping oppressed and marginalized groups from organizing and being upwardly socially mobile.

My current work with public defenders’ offices relates to deliberation in that criminal law often operates to make deliberation about important subjects ineffective or impractical, if not impossible. In order for there to be effective deliberations, we need to have intact communities with access to opportunity and education, and we need people who might otherwise be incarcerated to have seats at the table. When the criminal law is used to punish people for being poor, or as a substitute for adequate healthcare like we have seen with addiction, it constrains the range of possible deliberative exercises. To me, the way that my work relates to deliberation, is by allowing people who might not otherwise be able to participate, or who might not be able to participate fruitfully, to engage in deliberation in a meaningful way.