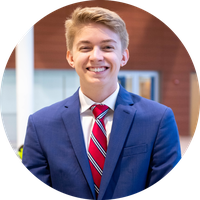 For my first interview for the CDD, I had the pleasure of interviewing student body Vice President, Jacob Griggs. Jacob is a senior Political Science major within the Schreyer Honors College. He spends his time on campus advocating for the student body, and has held several positions within student government. The following is an abbreviated version of our 30-minute interview.

Tell me a little bit about your role in student government.

I started off my time within student government as a Representative and then steadily worked my way up through the organization.

In student government, what is your primary focus as Vice President?

As Vice President, I spend most of my time advocating for student initiatives that would better the quality of student life on campus, as well as deliberate with executive leaders on campus such as President Barron. Our organization also focuses a lot of time advocating for diversity and inclusivity, educational equity, mental health awareness, and sexual violence awareness.

In your opinion, what are important elements of deliberation?

For me, I think that having access to the conversation is imperative. I also think that it’s important for the people making the effort to deliberate to see tangible results – which is something our democracy sometimes lacks.

How do you yourself succeed when deliberating with others, especially in student government?

I personally prefer to be a direct form of leader and deliberator. In other words, I think that it is more efficient to be clear with deadlines and requirements, but I also understand the importance of considering other people’s voices. I also work diligently on my time management, and try my best to ensure that I am being as effective and efficient as possible.

How would you encourage others to become involved in politics and/or their local community?

I recommend finding something that you’re truly passionate about. If you’re passionate about the cause that you’re fighting for, you will always have that drive to keep working towards your end goal. Also, don’t force yourself to be a leader if that isn’t who you are. It’s okay to be a follower – let’s just get things done.

Why do you believe people in our democracy today struggle to deliberate?

Do you believe that, in the future, we as people will be able to overcome this problem with civil democratic deliberation?

I think that it’s definitely possible. However, I think we have to really want it – and i’m not sure everyone is on that page yet. I’m optimistic, but we certainly have a long road ahead.