As we approach the mid-term elections, Americans are both polarized and intense in their feelings. There is perhaps no better illustration of this than how citizens view individuals in the public eye. A new McCourtney Institute Mood of the Nation Poll reveals that Donald Trump continues to be the most dominant polarizing figure in US politics.  But former NFL quarterback Colin Kaepernick, Supreme Court nominee Brett Kavanaugh, and Special Counsel Robert Mueller are not far behind. Every Mood of the Nation Poll asks a nationally representative sample of 1,000 citizens to tell us, in their own words, what has made them proud, angry, hopeful and worried. Their answers to these questions, and the words they use in those answers, reveal deep partisan divides.

The chart below is based on our September 5-9 poll, and shows how words are used differently by Republicans and Democrats when describing what caused them to feel negative emotions (angry about recent news and politics, or worried about the next 12 months) or positive emotions (proud about recent news and politics, or hopeful about the next 12 months). Words are bigger when they are used more frequently and more consistently—by Republicans, Democrats, or both—to express either positive or negative emotions.

Of greater interest are the words that sit in the upper left or lower right quadrant. These are the words the Mood of the Nation Poll reveals as polarized. Words to the upper left were used by Democrats in positive contexts or Republicans in negative contexts or both, with examples including democratic, democrats, progressive, liberal, resistance, protesters, immigrants, and impeachment.

Words to the lower right were polarized in the other direction, used by Republicans in positive contexts or Democrats in negative contexts or both. Examples include republican,tax, greedy,wall, tweets,and, most prominently of all, president, donald, and trump. In fact, trump has been the single most clearly polarized word in every Mood of the Nation Poll since June 2016. 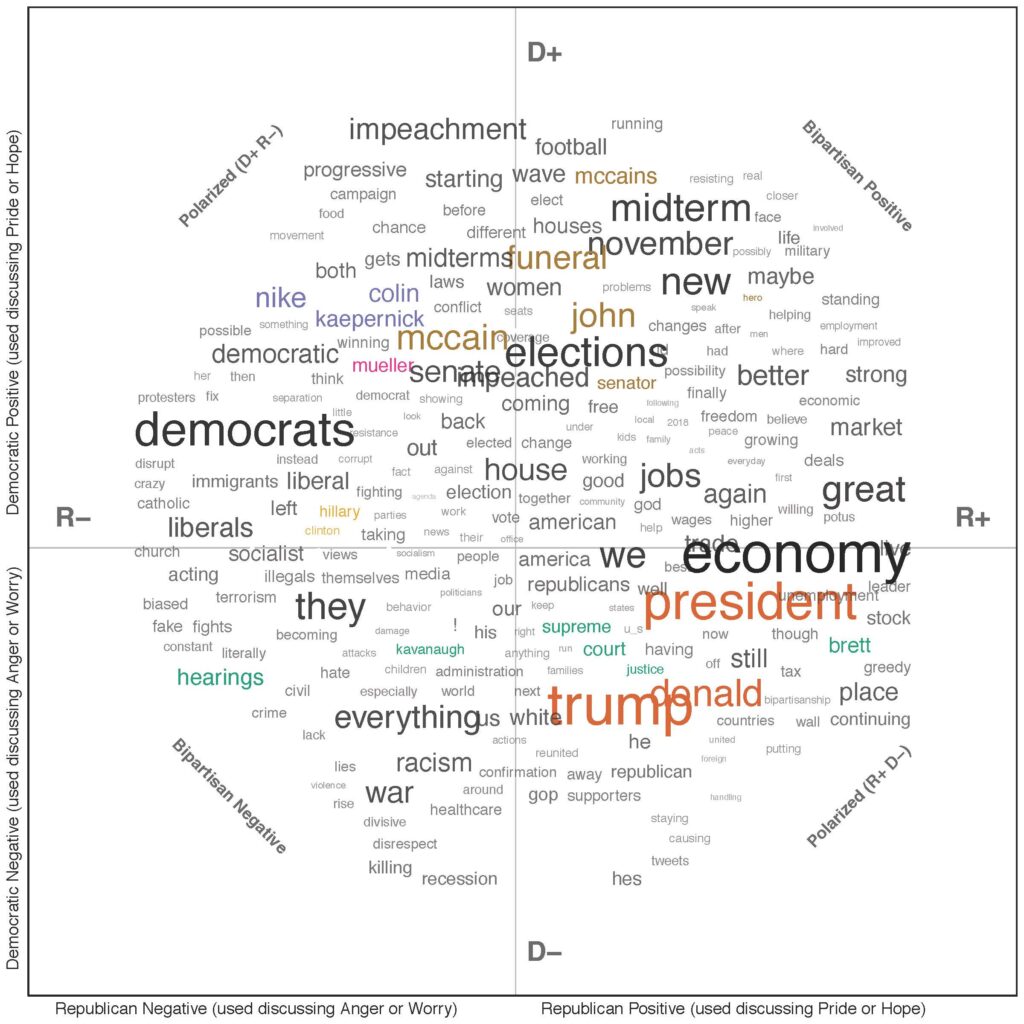 While President Trump has been a consistent source of polarized emotion, there are other individuals, highlighted in different colors with associated words, who evoked spontaneous and, in several cases, highly polarized emotions in the MOTN poll of early September.

On September 4, one day before we began asking people about the sources of their anger or pride, Colin Kaepernick and Nike announced a new ad campaign. This stoked positive emotions in those supportive of Kaepernick and other NFL players protesting police brutality, like this 57-year-old black Democratic woman from Georgia who expressed extreme pride in:

Nikes decison to use Kapernick as an inspiration to a movement of free speech.

Even more so, it stoked anger in those who oppose Kaepernick’s protest, like this 59- year-old white Republican man from Pennsylvania who reported being extremely angry about:

Kaepernick and nikes disrespect for the national anthem.

Opponents made public shows of burning Nike gear and calling for a Nike boycott, and many of our respondents expressed strong reactions in the otherdirection caused by such oppositionto the Nike-Kaepernick deal. One 59-year-old white Republican man from Missouri expressed pride about:

And one 36-year-old white Democratic woman from Louisiana said she was angry about, among other things:

… this nonsense with people boycotting Nike.

There also continues to be a high level of intense polarization in the feelings aroused by Special Counsel Robert Mueller. Democrats frequently cited Mueller’s investigation as a source of hope, echoed often in answers that also included words like impeachment or impeached. In a similar vein, one 36-year-old Democratic man from Michigan cited as his source of extreme hope:

For the first time in the Mood of the Nation Poll, a small number of Republicans began to echo President Trump’s characterization of the Mueller investigation as a witch hunt, and the investigation was frequently cited among a list of things that made Republicans angry. A 54-year-old female Republican from Texas described the cause of her extreme anger (and skepticism), like this:

Fake news & the skewed media (which is tied in to the Democrat party), the Mueller “investigation.”

One individual joined President Trump as a polarizing figure in the other direction. Even before allegations of sexual assault were raised, the nomination of Brett Kavanaugh for the Supreme Court drew partisan reactions and expectations about the future. An 82-year old Republican man from Texas offered Kavanaugh as a reason for being extremely hopeful:

I believe Judge Kavanagh will be approved and we can continue to undo years of over regulation and increasingly bigger government.

In contrast, one 35-year old Democratic woman from Nebraska was extremely worried about:

Kavanaugh’s confirmation hearings drew sharp anger from partisans on each side—the word hearingsis prominent in the lower left corner—but for completely polarized reasons. Democrats were angry about the Republicans’ behavior. One 55-year-old Democratic man from Pennsylvania was extremely angry about:

The Kavanaugh hearings and the way the Republicans are stonewalling the democrats.

But many more Republicans were angry about the opposition to Kavanaugh on display at his hearings. For example, one 77-year-old Republican woman from Illinois was extremely angry about Democratic Senators on the committee:

And some were angry about citizen reactions, echoing a recurring theme in MOTN responses of suspicions about the motives of protesters on the left. For example, one 72-year-old Republican woman from Texas was extremely angry that:

kavanaugh debate was a circus…schummer paid people to protest.

Finally, former Secretary of State Hillary Clinton was not much in the news, but still appears on the edge of the polarized area. This was due to nine Republican respondents mentioning her, primarily in expressing anger or, like this 38-year-old Republican man from Florida, worry:

That Hillary Clinton, who is a LIAR and a CRIMINAL is not in Prison.

Indeed, Republicans have consistently expressed anger toward Hillary Clinton before and after the campaign.  Her name is not more clearly in the polarized region only because none of our Democratic respondents mentioned her in any context.

Of course, not all figures in the news are polarizing. Both Democrats and Republicans mentioned the late Senator John McCain or his funeral as objects of pride – using words like heroand honor. Perhaps surprisingly, more than three times as many Democrats did so – likely due the tensions between McCain and President Trump in the last two years evoking mixed emotions among McCain’s fellow Republicans.

Political polarization can take many forms, but ordinary citizens often experience it through strong emotional responses to individuals in the news. These feelings emerge when citizens can answer poll questions in their own words. As we approach the 2018 midterm elections, it is clear that nearly all citizens, even those with little interest in politics, have strong feelings about President Trump. But the deep divisions in the nation are also reflected in individuals like Brett Kavanaugh, Robert Mueller and Colin Kaepernick who – whether intentionally or not – compete with the President for the nation’s attention.

Burt Monroe is Liberal Arts Professor of Political Science at Penn State, Director of the Center for Social Data Analytics, and Chief Scientist for the McCourtney Institute Mood of the Nation Poll.

Eric Plutzer is editor of Public Opinion Quarterly and Professor of Political Science at Penn State, where he serves as Director of Polling for the McCourtney Institute for Democracy.

Michael Berkman is Director of the McCourtney Institute for Democracy and Professor of Political Science at Penn State.