Americans’ trust in the FBI is sharply divided along partisan lines, finds a recent Mood of the Nation Poll from the McCourtney Institute for Democracy at Penn State.  The falling trust in the FBI is not confined to the FBI’s leadership but extends to the agents as well. A large majority of Republicans believe that the agents are biased against President Trump.

Between February 5th and 8th, The Mood of the Nation Poll asked a random sample of 1,000 Americans “How much of the time do you think you can trust the FBI to do what is right?”

Among Democrats, 67% trust the FBI to do what is right “most of the time” or “just about always.” This contrasts with only 39% of Republicans. 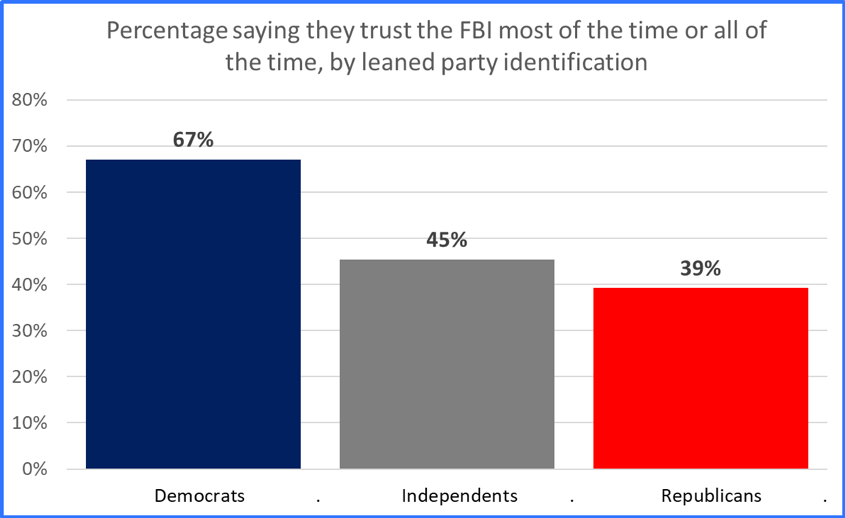 Does Republican distrust extend to the agents?

This low level of support is clearly a result of President Trump’s firing of James Comey and his questioning of the FBI leadership’s impartiality.  With respect to the FBI’s 16,000 agents and intelligence analysts, the Trump administration has offered more mixed messages.  On the one hand, he recently tweeted that FBI rank and file “are great people!”

The top Leadership and Investigators of the FBI and the Justice Department have politicized the sacred investigative process in favor of Democrats and against Republicans – something which would have been unthinkable just a short time ago. Rank & File are great people!

On the other hand, this tweet follows other tweets and comments that lump the leadership and agents together, as when he tweeted, “FBI TAINTED” on December 26th.

WOW, @foxandfrlends “Dossier is bogus. Clinton Campaign, DNC funded Dossier. FBI CANNOT (after all of this time) VERIFY CLAIMS IN DOSSIER OF RUSSIA/TRUMP COLLUSION. FBI TAINTED.” And they used this Crooked Hillary pile of garbage as the basis for going after the Trump Campaign!

Our poll shows that the President’s followers are not picking up on his more recent support.  We offered poll participants three different critical perspectives on the FBI that might account for low levels of trust – that agents are poorly trained and incompetent, that agents are biased against liberal groups like Black Lives Matter, or that agents are biased against the President and his agenda.  We also offered the option that “Most FBI agents enforce the law fairly, and criticisms of the FBI are unfair.”

Overall, only 49% of Americans felt that “most FBI agents enforce the law fairly,” including 68% of Democrats.

But what stands out most is that a majority of Republicans, 54%, felt that FBI agents were “biased against President Trump and his agenda.” 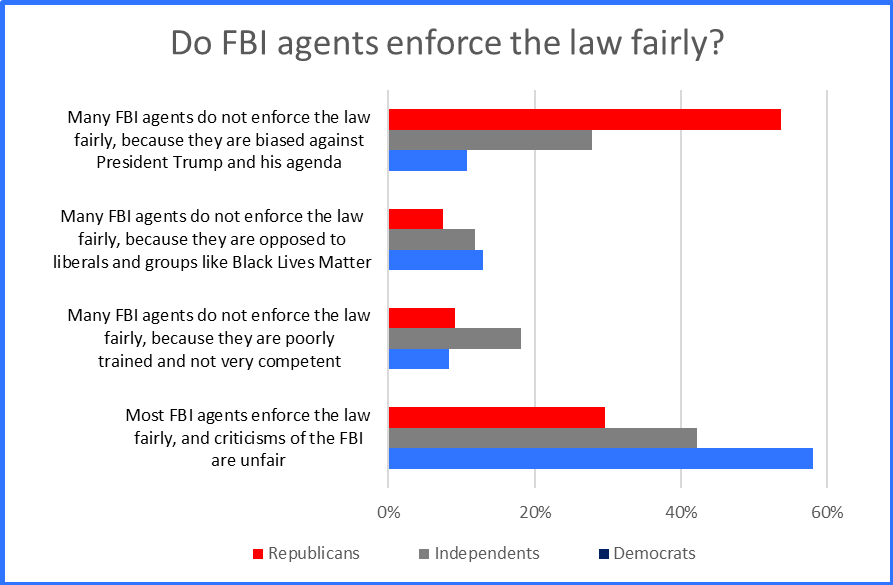 These results are consistent with other recent polls and show a marked contrast with polls  taken as recently as 3 years ago, which high levels of Democratic support and even higher levels by Republicans.

It is especially remarkable that negative views of FBI agents are especially intense among older Republicans.  Among Republicans 45 or older, 60% believe the agents are biased against the President.  This generation of American conservatives, all born before 1973, were socialized to see the FBI as the epitome of American law enforcement, and especially tough against perceived threats from the left, not the right.

Every Mood of the Nation poll also uses open-ended polling to ask Americans about what it is in the news and politics that makes them angry, and to tell us what worries them about the future.  Here, too, we see remarkable polarization and change over a very short period.  When we asked 1,000 Americans what made them angry or worried in November of 2017, not a single person mentioned the FBI.  But asked again in February 2018, 17 out of 369 Republicans (about 5%) mentioned the FBI without in any way being prompted for it and before we asked any questions about the Bureau.

A Republican, 57 year old white woman from Idaho, for example told us she was angry about the

FBI and Democrats working to corrupt the ‘Justice’ department to fix an election, and no one is yet in jail.

And a 35 year old Republican white man from Louisiana was angry:

…that some people in the FBI violated Federal law by using the Foreign Intelligence Surveillance Court for political purposes.

Not surprisingly, voters angry with the FBI see the FBI deficiencies as part of a broad pattern and mentions of the FBI were frequently intertwined with criticism of the Democrats, the “deep state” or the media.  Another Republican, a 62 year old Californian was angry that:

The news agencies are just a bunch of liars. The FBI is full of people who are more concerned with agenda than protecting the American people.

These findings on American’s growing polarization over the FBI offer some reason for concern.  Previous McCourtney Mood of the Nation polls have found that Americans of both political parties have maintained high levels of support for the courts, suggesting that this important institution in the system of checks and balances was holding.

In the past, the Justice Department and FBI have generally been recognized as the most independent of the cabinet agencies, especially when it came to criminal matters such as political corruption.  The individuals we today regard as heroes of the Watergate crisis were precisely those individuals who resigned or put their careers in jeopardy in order to safeguard the independence of agencies investigating the president.

Yet we see now relentless and unprecedented attacks by the president have taken a toll as Americans now see the FBI in strongly partisan terms, and few members of the president’s own party have spoken up to protect the FBI’s independence.