By Susan Welch and Eric Plutzer

The COVID-19 pandemic has changed not only routines of daily life but also some of our thinking about the nation’s problems, a Penn State Mood of the Nation Poll finds.

A significant number of people are fearful of activities they took for granted before the pandemic. We asked about seven activities. Ninety-seven percent of our respondents expressed having more fear about at least one of the activities. For example, forty-two percent have become more fearful of receiving mail and packages at home, and for thirty-eight percent, eating take home food and interacting with teens and young people became more frightening.

The survey was conducted April 27-30, when about 30,000 new cases and 2,000 deaths were being reported each day (the maximum margin of sampling error is ± 4% for analyses of the entire sample). 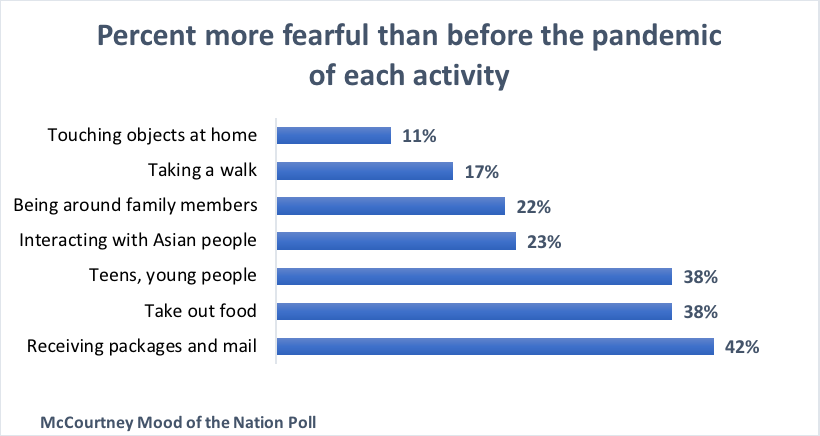 At the opposite end of the spectrum, relatively few people were afraid to touch objects in their own home (eleven percent) or take a walk in their neighborhood (seventeen percent). There is no evidence that the coronavirus can spread through food, and objects received in the mail are no more dangerous than surfaces in the home. But the poll shows that most Americans feel that familiar places and objects are less threatening than bringing new things into their homes, whether mail or an order of food.

Some respondents’ fear of Asian people no doubt grew from the emphasis by the press and administration, in the beginning especially, on the origins of the virus in Wuhan China. Numerous Americans of Asian descent told stories of hostile remarks and even some physical violence against them.

Though we expected that those in areas of the highest incidence of COVID-19would be the most fearful, we did not find many significant differences between those who lived in a county in the top ten percent of COVID-19 cases per 100,000 and those who did not. The exceptions were fear of taking a walk in the neighborhood and receiving packages and other deliveries into ones’ homes. There, possible exposure to the virus from other community members led those in areas of high COVID-19incidence to be more fearful.

A person’s partisan stance shaped these feelings of fear, though almost everyone of every partisan persuasion expressed at least one fear. We expected that Republicans would be less fearful than Democrats because the president downplayed the importance and severity of the pandemic.

The chart below shows that this expectation is correct with one notable exception. Though Republicans (red bars) are less fearful than Democrats (blue bars) of bringing things into their houses and interacting with family members and with teenagers, they are just as fearful of Asian people. It is likely that the president’s blame of China has more resonance with Republicans than others, and, despite the fact that they believe that the virus is not as virulent as other Americans think, they are more influenced by the blame placed on China. 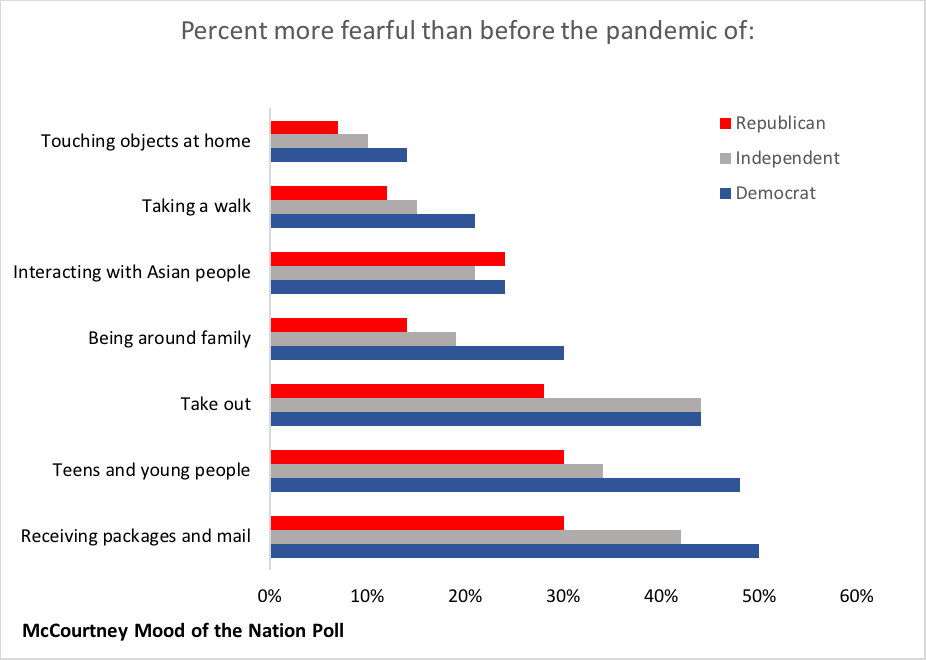 In the counties where the incidence was in the top quarter, partisan differences diminished in a few cases although highly significant differences did persist in fear of interacting with teens, bringing deliveries into the home, interacting with family, and walking in the neighborhood. For most of the areas of potential fear, Republicans and especially Independents were more fearful than those in lower incidence areas, but still less fearful than Democrats.

In light of the pandemic, many Americans see key social and political problems getting worse

The pandemic has changed people’s attitudes toward their normal day-to-day activities, but it has also changed some people’s minds about political issues.

We asked our respondents whether or not they saw as problems three issues concerning the workings of our government itself, including barriers to voting, the government’s capacity to respond to major emergencies, and Americans’ inability to work together to solve problems; and three “kitchen table” issues, including the percentage of the public who lack health care, the low federal minimum wage, and the number of Americans who are always been one paycheck away from financial crisis.

The difficult time that Americans have had during the COVID pandemic did highlight both the economic problems of many Americans and the problems that the government has had in marshaling resources and citizen support to fight the pandemic.

All three groups had about the same increase in concern about Americans living paycheck to paycheck. Overall, more Democrats see this as a serious problem than Independents, and more Independents are concerned than are Republicans.

After the issue of living paycheck to paycheck, Democrats were the most concerned about the percentage of the public who lack health care, which 78 percent of Democrats labeled a serious concern. Table 3 indicates that Republicans’ views about the seriousness of that issue did not change before and after the beginning of the pandemic. The biggest change was among Independents. Fifteen percent more Independents saw it as a serious problem in April compared to before the pandemic. 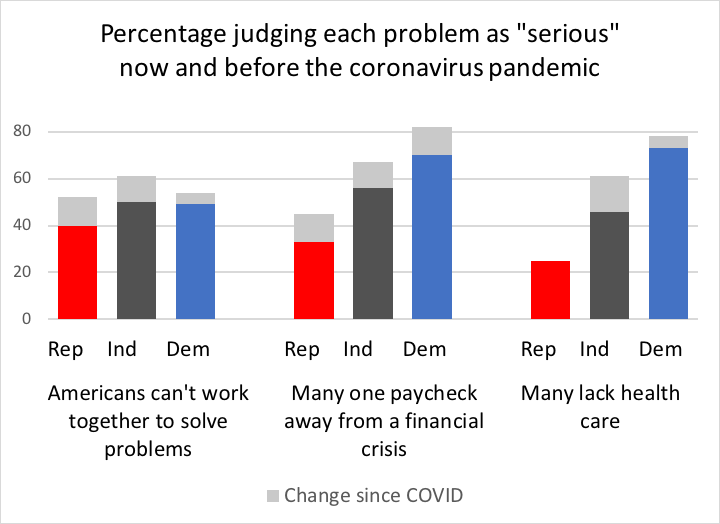 Implications for the future

The global pandemic has made millions of Americans sick and cost the lives of more than 150,000. It has resulted in millions losing jobs and as early as May caused 100,000 business to shut down. But the less dramatic impacts on day to day living have may have major consequences as well.

Living in fear of infection from food, objects and strangers is the kind of daily stressor that can have long term consequences for mental and physical health. And the increasing concern for those living paycheck to paycheck and for those lacking health insurance can have downstream consequences for the upcoming election and the kinds of policies that will be a priority when the pandemic is past.

At the same time, though Americans are suffering together, there is no sign that it has brought their outlook and opinions closer together.

How the poll was conducted

This poll was conducted from April 27-30, 2020 by YouGov in partnership with the Penn State McCourtney Institute of Democracy.

All Mood of the Nation questionnaires are designed by the McCourtney Institute polling team, with the fieldwork conducted by YouGov, an online polling organization. The YouGov panel includes over 1.8 million individuals who agree to complete occasional surveys. The 1,000 individuals who completed the McCourtney Mood of the Nation Poll were matched to the joint distribution from the Census’s American Community Survey in terms of age, sex, race/ethnicity, and years of education. The frame was augmented by matching to the November 2010 Current Population Survey and the Pew Religious Life Survey in order to include voter registration, political interest and party identification in the selection model. The unweighted data are broadly representative of the US population in terms of age, education, and region.

The data have been weighted to adjust for variation in the sample from the adult United States population with respect to demographic variables such as geographic region, gender, race/ethnicity, age, and education, and political variables such as voter registration status and political interest. Weighting details are described in a paper by Ansolabehere and Rivers.[1]

Core questions asked in every Mood of the Nation Poll can be viewed here.

Supplemental questions reported in this report are as follows:

Many Americans report that they are more fearful today than they were before the coronavirus pandemic. For each of the following please tell us whether these activities make you more fearful than they did before.

For each of the following, please tell us whether you feel this is a serious problem facing the nation today.

Many people tell us that the coronavirus pandemic has led them to change their opinions about many things. For each of the following, please tell us how you would have rated these several months ago, before the pandemic.

In non-probability polls, as in probability based telephone polls with very low response rates, the reported “margin of error” requires the assumption that post-stratification weighting eliminates major sources of bias, so that repeated administrations of the same polling methodology would yield results centered on the “true” population value.

The matching methods utilized by YouGov have been validated in several national elections, using actual state-by-state results to evaluate the accuracy of poll estimates based on respondents from those states (see, for example, Rivers and Bailey 2009) These evaluations show that poll results, plus or minus the nominal margin of error includes roughly 95% of the actual election results.

For smaller subgroups, the margin of sampling error is larger. For example, when restricting analyses to all Republicans, Democrats or Independents, it is plus or minus 9 points.