By Robert Bullard and Beverly Wright 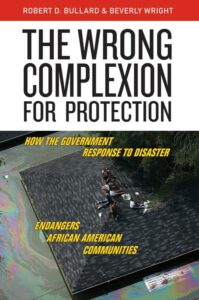 Purchase the book from NYU Press

When the images of desperate, hungry, thirsty, sick, mostly Black people circulated in the aftermath of Hurricane Katrina, it became apparent to the whole country that race did indeed matter when it came to government assistance.

In The Wrong Complexion for Protection, Robert D. Bullard and Beverly Wright place the government response to natural and human-induced disasters in historical context over the past eight decades. They compare and contrast how the government responded to emergencies, including environmental and public health emergencies, toxic contamination, industrial accidents, bioterrorism threats and show that African Americans are disproportionately affected.

Bullard and Wright argue that uncovering and eliminating disparate disaster response can mean the difference between life and death for those most vulnerable in disastrous times. This subject has direct implications for people who care about the institutions that comprise American democracy and how to make them more equitable.

Join us for a discussion led by faculty from Penn State’s Sustainability Institue, which will host a virtual event with  Bullard on April 1 as part of a year-long initiative on environmental justice.

Register for the discussion

As with any book club, reading the book is not required to attend the book club discussion. Here are some additional resources to help you understand its main ideas: