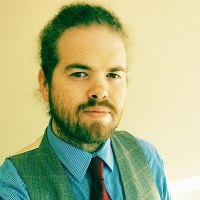 This week, we had the pleasure of speaking with Brett Diaz. Brett is a Ph.D. candidate in Applied Linguistics at Penn State. He is studying affect and emotion in health settings. The following is an abbreviated transcript of our 30-minute interview.

I think I would go with the intuitive definition of deliberation. Deliberation is taking the time to talk with others, uptake opinions, uptake views, try to engage with them, and see how the pieces fit together. Then the question is whether or not and how people can accomplish that, and what that actually looks like. Because it’s easy enough to talk about democracy – it’s a whole other business to actually do democracy. Deliberation fits into that same problem. The forms of deliberative democracy that I’ve experienced have involved an event occurring, people talking about it, and people trying to orient themselves toward decision-making that they think is appropriate. Whether they vote on it, or whether they join a political activity to further that or not, seems to change depending on the people. A lot of my experience with deliberation is being politically active in my younger life. But I went from trying to engage people, trying to use discourse in open spaces to learn about political issues and find out how people saw the world, to burning out. More recently, I have now gone back into this deliberative process, trying to see what people do and how they understand democracy and what it means to engage in discourse. Yet it’s become increasingly apparent to me that discourse is not really occurring. I’m seeing less and less deliberation and more siloing and echo-chambering. I feel like there should be more discourse, but I do not see it.

What do you believe is the ideal form of deliberation and what is preventing people from achieving it?

You have people that are trapped in atomization. Democracy is problematic when you have lots of people and lots of voices that are not listening to each other. And even when they do listen to each other, they are unable to empathize, essentially. What deliberation ought to be is people, with whom there is a community, and within that community, you work toward the betterment of all people. There are ontologically different people, but you don’t segregate people based on class lines, for example. When you engage in deliberative activity, it is this dialectic of giving and taking. That for me is the best form of deliberation, where you have this on-going process of improvement for all people, where some people must, admittedly, give things up so the whole can approve. This is the quintessential Hegelian dialectic. You begin thinking one thing, but as you continually engage with the other, you modulate more and more toward this middle, new emerging space, where both become one. I know that’s abstract, but it’s having people being able to give up things from their own rational needs, moving toward others’ needs because the ultimate rational need is for everyone to improve. This is an on-going dialectic form of discourse. Otherwise, deliberation is essentially pointless. You can talk about it all you want, but if the central tendency is for people to be individuals, you will not get anywhere that is productive.

What would be a deliberative framework that aligns with the socialist ideas you have been working with?

Let’s focus on the workplace, because industry is the most properly socialist way to think about it. In that case, you would have collecting bargaining. In a collective bargaining environment, you have what is essentially a deliberative process towards decision making. Everyone who needs a decision to be made has bought in through paying dues or being a card-carrying member. In that collective bargaining framework, you have issue X toward which the people must come together, deliberate, create some answer, and address X. You have some group through either direct action or delegation who comes together to reach a conclusion. You have placed people in an industrial situation, they have an issue that directly affects them, and if they do nothing, it does not change. If you do something, it may change it. So you create the conditions under which people can identify things that are good for them and bad for them through a deliberative process with other people who are equally affected by the environment, but may have different perspectives and investments. You reach some outcome that is amenable to all parties.

Do you believe deliberation could function to shift minds and hearts toward a more socialist way of approaching these industries?

The “could” there is really vague. Anytime people are faced with an alien proposition, they have two essential options: integrate or completely divorce themselves from it. Whether it “could” would depend on the investments and stakes that people have at any given time and who the other actors are that are present. For example, I am not going to walk into a MAGA rally and have people think what I’m saying is good, though you will actually find people at these rallies whose beliefs are copasetic to my perspective. Much of Trump’s rhetoric leading up to the election had a socialist flare to it. But people don’t understand that relationship. All they understand is that a special figure is saying X and they buy X, not the rhetoric under it, because they haven’t had the chance or spirit to deal with it in thinking, “What does X mean?” So a deliberative framework might help them unpack what such a proposition does mean, where they can decide whether or not they buy in, and not because of the special person but because now they understand what X entails. But you will certainly have people who, after they learn what X is, they will definitely buy it. That’s the dark side of democracy, where just because people deliberate doesn’t mean they will come to the conclusion that you want them to come to. They won’t come to a positive conclusion. They will instead come to the conclusion that what they originally thought was the right answer.

What does deliberation look like when you are in spaces speaking directly with other socialist thinkers?

I’ll talk for a moment on the Democratic Socialists of America (DSA) chapter in State College. The DSA is a multi-tendency organization, a big tent organization. It is an interesting place because I don’t think people have a lot of the same ideas that I do. People have adopted some perspective, some idea about what they believe or about what the current political environment is like. So they have adopted more attitudes, not necessarily beliefs. Deliberation is a weird thing in a place like that because you make assumptions about people’s beliefs that may or may not be accurate. Or you may have cross-talk where you think you are talking about the same things but you’re not. It’s one of the problems with communication in general. We can both say Marx, but I may mean one thing, and you mean a completely different thing, but we will never know until a critical issue comes up and we realize what we both think. Or just in that group alone, having to bring up the distinction between democratic socialism and social democracy. That distinction is not clear to the vast majority of people at all. People will use them interchangeably. You can talk right past each other.

Is there anything that makes you hopeful about the future of our democracy?

I think Hannah Arendt had it right in that her observations on totalitarianism are still true and still active. That when you have the disenfranchisement of groups, you lend them to the belief that they have a right to hurt others because they feel hurt themselves. So I am neither optimistic nor pessimistic about the future. But our low empathy will lead us to further problems. I don’t think you are going to go anywhere good from that. Now, with the ascension in the American consciousness of people like Bernie Sanders, the Democratic Socialists for America, there will be room for deliberation, but there is a very distinct and direct danger to that inclusivity. Because it can be co-opted by beliefs that just telling people you respect them is enough, and that just because you respect people’s autonomy that that’s enough.